UN Chief: ‘The answer is in our hands’

During his speech at COP27, António Guterres said that “we are losing the fight of our lives” against climate change 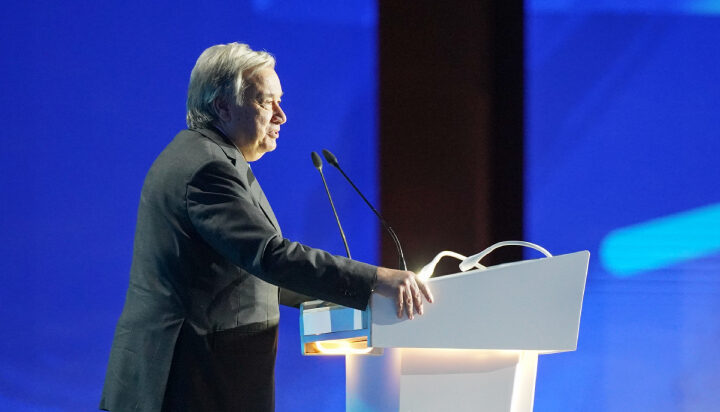 COP27 is a reminder that the answer to saving the planet from a climate catastrophe is “in our hands.”

That’s according to UN Chief, António Guterres, who explained that an upcoming moment of history captivates why fighting climate change is even more important.

He explained: “In just days, our planet’s population will cross a new threshold. Eight billion members of our human family will be born. This milestone puts into perspective what this climate conference is all about.

“How will we answer when baby eight billion asks, what did you do for our world – and for our planet when you had the chance?”

Guterres did not hold back on how poorly the world was combatting climate change, stating “we are in the fight of our lives – and we are losing.”

His speech comes just after the release of a third UN report in as many weeks, highlighting the tragic impact of climate change on our world – this time revealing that the last eight years have each been the hottest since records began.

The war in Ukraine has been a common excuse for returning to fossil fuels and climate inaction in recent months, as countries look to secure energy supply at whatever cost.

However, on this issue, the UN Chief said it is not acceptable that the world is not focussed on climate change, calling it the “central challenge of our century.”

He called for peace in the war but stated that stopping climate change could help with this – “many of today’s conflicts are linked with growing climate chaos,” he said.

Climate finance and cooperation between both developing and developed economies were also considered critical by the Secretary-General.

“The deadly impacts of climate change are here and now. It is a moral imperative, a fundamental question of international solidarity and climate justice. Those who contributed least to the climate crisis are reaping the whirlwinds sown by others,” he concluded.