It will create a local source of sustainable hydrogen from non-recyclable plastics, which would otherwise go to landfill, be incinerated or exported overseas 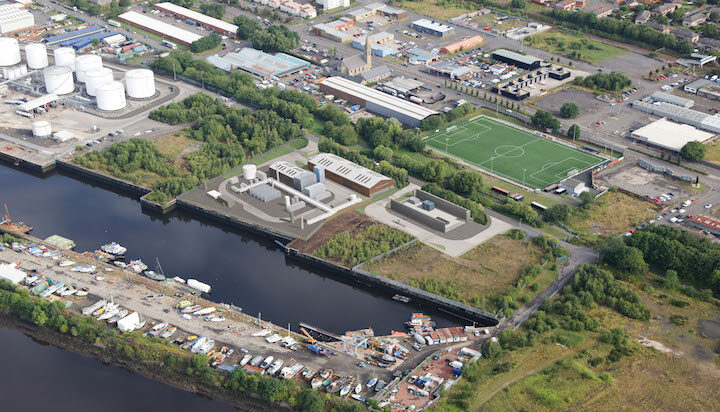 An artist's impression of the facility. Image: Peel NRE

Plans to develop a new £20 million facility that turns plastic waste into hydrogen in Scotland has been given the green light.

The 13,500-tonne plant, which will be developed at Rothesay Dock in West Dunbartonshire by Peel NRE, part of Peel L&P, will be the second of its kind in the UK.

It will create a local source of sustainable hydrogen from non-recyclable plastics, which would otherwise go to landfill, be incinerated or exported overseas.

The hydrogen produced will be used as a clean fuel for heavy goods vehicles (HGVs), buses and cars, with plans to link a hydrogen refuelling station on the site.

It supports the government’s target to double hydrogen production by 2030 as part of the recently-published Energy Security Strategy.

Richard Barker, Development Director at Peel NRE said: “This is a fantastic moment for West Dunbartonshire and the surrounding area. It shows how the UK is innovating when it comes to rolling out new net zero technologies. The facility will address the dual challenge of both tackling our problem plastic whilst creating hydrogen, a sustainable fuel for future generations.

“Whilst the focus must remain on removing plastic from society, there are still end of life plastics that need managing. The £20m plant will play a pivotal role in making the best use of non-recyclable material, with the resulting hydrogen able to help cut carbon emissions from vehicles.”

The first such facility is being delivered at Peel NRE’s Protos site in Cheshire near Ellesmere Port, due to begin construction this year.