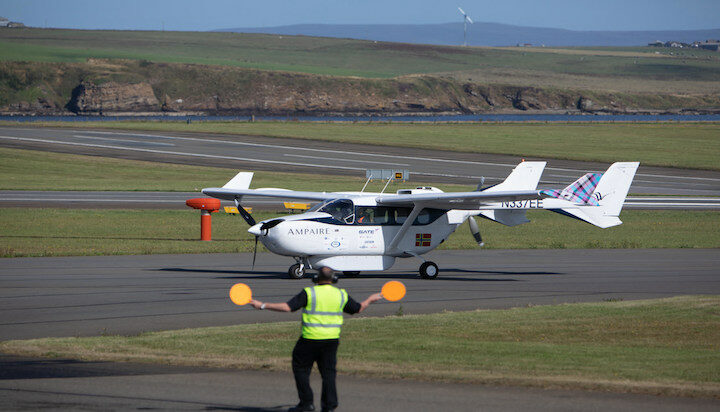 Surf Air Mobility’s Ampaire division has celebrated what is claimed to be the first hybrid electric flights in Scotland.

The trials, the first to operate on a viable regional airline route, saw Ampaire’s Electric EEL technology aircraft cross the Pentland Firth from Kirkwall Airport (KOI) on the Orkney Isles to the regional Wick John O’Groats Airport (WIC) in the north of mainland Scotland.

The Electric EEL aircraft runs on battery power and a conventional combustion engine, with Ampaire developing hybrid electric powertrain upgrades that are expected to reduce emissions and operating costs by as much as 25% initially.

Funded by UK Research and Aviation (UKRI), the trials are part of the Sustainable Aviation Test Environment (SATE) project, based at KOI and led by Highlands and Islands Airports (HIAL).

Susan Ying, Ampaire SVP for Global Operations added: “We are delighted to have made history in Scotland this week with these pioneering hybrid electric flights on viable lifeline routes, an important segue to scheduled, sustainable air service.

Graeme Dey, Scottish Government Minister for Transport added: “The Kirkwall test centre and companies such as Ampaire put Scotland at the forefront of the transition to low carbon aviation.

“These demo flights are an important step towards delivering our commitment to decarbonise scheduled passenger flights within Scotland by 2040.”