Shadow Business Secretary John Denham has criticised the Coalition for dithering over the plans for the Green Investment Bank. He quizzed his counterpart after Vince Cable announced further details of […] 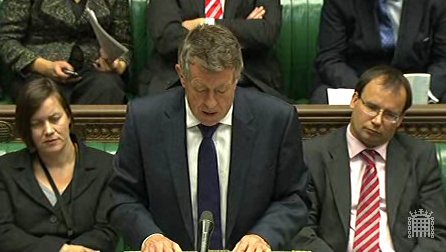 Shadow Business Secretary John Denham has criticised the Coalition for dithering over the plans for the Green Investment Bank.

He quizzed his counterpart after Vince Cable announced further details of the GIB’s future in a speech to the House of Commons today.

In a long answer that drew a rebuke from Speaker John Bercow for eclipsing the length of Mr Cable’s original comment, Mr Denham said: “Will the Business Secretary confirm that it has taken a year of infighting to get us to this stage? Isn’t it true that the Government is at odds over green policy? Will he confirm that just over a month ago the Business Secretary himself tried to block the adoption of the carbon emissions targets announced this week?”

While he expressed support for the GIB, Mr Denham also suggested the Coalition was piggybacking on Labour’s “green legacy”, echoing his Labour colleague Meg Hillier’s criticism of Energy Secretary Chris Huhne when he announced the carbon emissions targets in parliament last week.

Vince Cable dismissed the “carping term of response” from his Shadow by countering: “Why in 13 years didn’t [Labour] do it?”

Mr Denham also worried that less mature technology would not receive enough support. The Business Secretary replied: “The GIB has a specific mandate for projects that are high risk and ready for commercial deployment.”