‘Mammoth’ new facility to suck 36,000 tons of carbon annually from the air in Iceland

Climeworks’ new direct air capture plant will have a nominal carbon dioxide capture capacity of 36,000 tons per year when fully operational, with the aim of removing gigatons of CO2 from the atmosphere each year by 2050 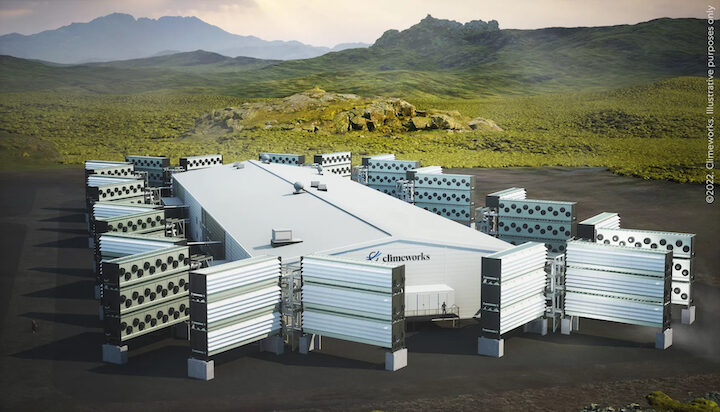 An illustration of what Climeworks’ new direct air capture plant, Mammoth, will look like once completed. Image: Climeworks

Swiss climate tech company Climeworks has announced it has broken ground on what it claims will be the world’s direct air capture and storage facility in Iceland.

Dubbed ‘Mammoth’, the new direct air capture (DAC) plant will have a nominal carbon dioxide capture capacity of 36,000 tons per year when fully operational, with the aim of removing gigatons of CO2 from the atmosphere each year by 2050.

Mammoth is Climeworks’ 18th project and its second commercial DAC and storage facility, larger than its previous Orca plant, which can capture up to 4,000 tons of carbon dioxide a year – equivalent to the emissions from 790 fossil fuel passenger vehicles annually.

In comparison, the new plant can capture around nine times as much CO2 as Orca.

Climeworks’ storage partner Carbfix will provide the permanent underground storage of CO2, with the Hellisheiði electricity power plant, operated by ON Power, supplying both companies with renewable energy to run the entire DAC and storage process.

Jan Wurzbacher, Co-founder and Co-CEO of Climeworks said: “Today is a very important day for Climeworks and for the industry as construction begins on our newest, large-scale direct air capture and storage plant.

“With Mammoth, we can leverage our ability to quickly multiply our modular technology and significantly scale our operations. We are building the foundation for a climate-relevant gigaton-scale capacity and we are starting deployment now to remain on track for this.”