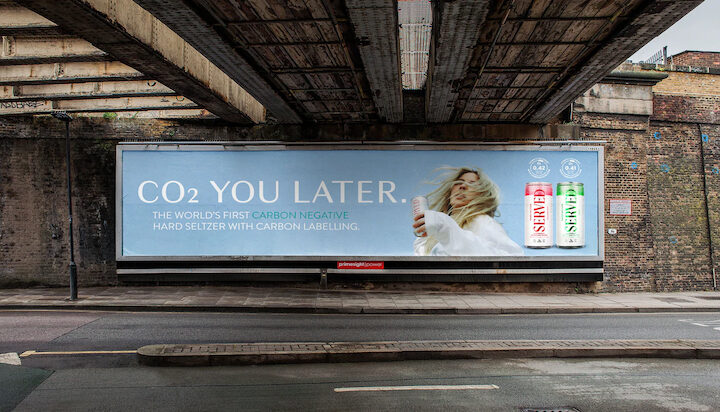 British hard seltzer brand SERVED, co-owned by musician and climate activist Ellie Goulding, has become what it claims is the world’s first carbon-negative brand of its kind.

The company has partnered with CarbonCloud to analyse its carbon footprint at all stages of production and operations, including agricultural inputs, packaging, processing, transport and distribution.

SERVED is also introducing carbon footprint labelling which will be rolled out across its range from next month.

The new label displays the carbon dioxide equivalent (CO2e), a value which converts the varying effects of different gases into the equivalent amount of CO2 it would take to create the same greenhouse effect.

SERVED’s lime and raspberry hard seltzers have a footprint of 0.41kg and 0.42kg CO2e per kg of product respectively.

The company helps reduce waste from going to landfill as its drinks use wonky fruits that would have otherwise gone to waste, also contributing to emissions reductions.

In addition, it has partnered with Planet Mark to assess Scope 3 upstream emissions such as waste, business travel, office emissions and homeworking and reduce its carbon footprint by 5% year-on-year by taking direct action.

SERVED also invests in carbon offsetting projects and in the last 12 months has offset more than 50 tonnes of CO2e and planted more than 1,600 trees, “significantly greater” than its business carbon footprint of 1.18 tonnes of CO2e.

Dean Ginsberg, SERVED’s Co-founder said: “Independently certified carbon labelling provides much needed environmental transparency – it allows consumers, who are increasingly looking for more sustainable choices, to make informed decisions on the products they consume. We hope this will help drive improvement across the food industry and encourage healthy competition to ‘race to the bottom’ in terms of emissions.”