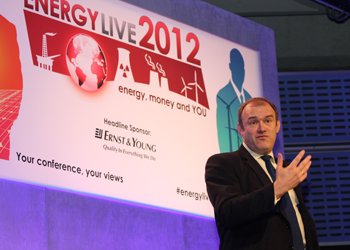 Speaking at the Energy Live 2012 conference at the QE2 in London, he shook off the week’s negative media attention by quipping, “It’s been an interesting week”. He added there has been “no change” to energy policy.

As forthright as he was ever likely to be just days before the Energy Bill is released, the Lib Dem told a packed-out audience of more than 400 people: ”Green is an economically efficient agenda if you get it right.”

It could have been a tough crowd to win over, with many major energy users in the house who have to cope with ever increasing carbon taxes.

However taking a question sent in by an ELN reader about why the Carbon Reduction Commitment is a “punitive tax” which has been “imposed on us”, he answered with humour it was normally a question he would pass to the Chancellor in the Commons.

Quizzed whether the Treasury was dictating policy, he declared: “The Energy Bill was conceived, developed and finessed in my department. But people would probably be surprised if we didn’t talk to the Treasury.”

Answering the fear that “green growth” will affect the economy, he stated: “I don’t accept sustainability is bad for growth – that was one thing when I came to power that I found missing – we’re not doing enough.”

Taking another question from an ELN reader in his stride about whether he would ‘kick Ofgem’s backside’, he said: “I think they’ve really upped their game and their Retail Market Reform is a real step forward.”