The Government needs to bring out the final Energy Bill this autumn or the UK could face serious problems getting the millions needed to reboot its power infrastructure. That was […] 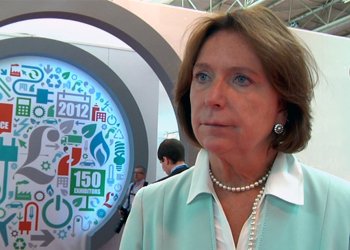 The Government needs to bring out the final Energy Bill this autumn or the UK could face serious problems getting the millions needed to reboot its power infrastructure.

That was the warning from Angela Knight, the new CEO of Energy UK in one of her first speeches to the industry, made at the Energy Event in Birmingham today.

Reflecting on her short period in charge of the trade body which represents the Big Six suppliers, she said the issues facing the sector were sharply coming into focus: “Clearly we have got a very big energy issue. The problem, as I see it, that we’re trying to fix is to give confidence to investors so the £100-200 billion is forthcoming.

“Secondly it is the security of supply with decarbonisation. Thirdly it is meeting the Renewable Energy Directive and the 2008 Climate Change Act, all in a difficult economic and consumer environment.”

She warned: “In this context of change, there is risk investment in the sector could slow. If that happens and timetables are delayed then that leads to shortfalls and that can’t happen.

“We therefore do have to see an energy reform package, a Bill this autumn, that is stable but is durable, that avoids undue complexity, fits coherently together, is compatible with an open competitive market… How big is that ask? I do not know. In all of that, consumers must not be ignored.”

With a background in finance, after fronting the currently unpopular British Banking Association, Ms Knight said she was well aware of how uncertainty could create “significant impediments” to infrastructure: “Unless investors see something that is stable, long term and secure… they won’t invest.”

In a coded reference to the Government’s hash of solar Feed-in Tariffs (FiTs) earlier this year, when the Government tried to cut subsidy without giving industry enough prior warning, the Energy UK chief stressed that energy policy must not be “retrospective” in any way: “If there’s no certainty, you can’t price the risk.”