A bronze plaque, which carries ‘a letter to the future’ says all of Iceland’s glaciers are expected to follow the same path in the next 200 years 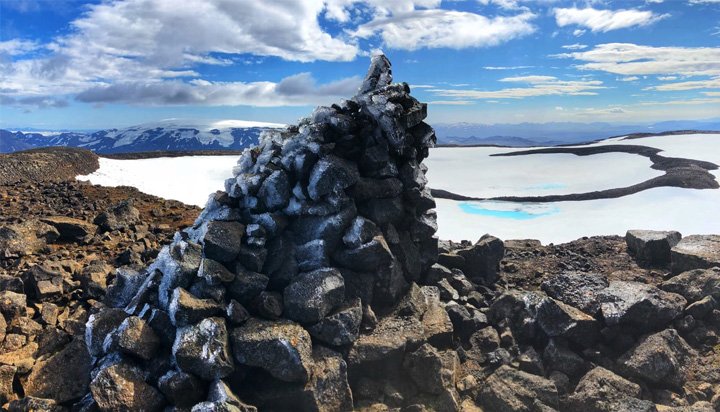 The first major glacier lost to climate change in Iceland was memoralised with a plaque during a ceremony on Sunday.

Mourners, including scientists and Prime Minister Katrin Jakobsdottir, Environment Minister Gudmundur Ingi Gudbrandsson and former Irish President Mary Robinson, gathered in Iceland to commemorate the loss of Okjökull, known as Ok, which fell victim to the changing climate and no longer meets the criteria to be classified as a glacier.

Researchers at Rice University in Houston, who initiated the project, said what was once a glacier has now been reduced to a small patch of ice.

The bronze plaque, which carries “a letter to the future” states all of Iceland’s glaciers are expected to follow the same path in the next 200 years and this monument “is to acknowledge that we know what is happening and what needs to be done”.

Cymene Howe, An Associate Professor of Anthropology at Rice University and Principal Investigator for the project said prior to the ceremony: “We will install the first memorial to a glacier lost to climate change anywhere in the world. Memorials everywhere stand for either human accomplishments like the deeds of historic figures or the losses and deaths we recognise as important.

“By memorialising a fallen glacier, we want to emphasise what is being lost – or dying – the world over and also draw attention to the fact that this is something that humans have ‘accomplished’, although it is not something we should be proud of.

“The conversation about climate change can be very abstract, with many devastating statistics and sophisticated scientific models that may feel incomprehensible. Perhaps a monument to a lost glacier is a better way to fully grasp what we now face. As cultural anthropologists, we understand the power of symbols and ceremony to provoke feelings, even for something as far away as a glacier that is now only ‘dead ice’.”