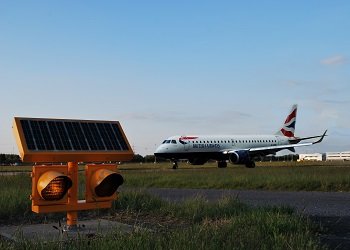 A London airport has invested £10,000 in solar-powered lighting systems in a bid to cut its energy usage.

London City Airport (LCY) has installed two guard lights (pictured), commonly known as Wig-Wags, at its runway entry points which are expected to run for 120 days without recharging.

The airport currently produces around 6,000 tonnes of carbon emissions mainly from gas and electricity and the solar lights will help towards reducing the airport’s emissions. It is also investing in a new building management system, enabling centrally-controlled temperature and lighting in all public areas.

Kevin Wincell, Airfield Operations Manager at London City Airport said: “The solar-powered systems will not only save energy and help reduce the airport’s carbon emissions, they will also represent a financial saving in the longer term. We are currently exploring other options in terms of installing LEDs for airfield lighting and will continue to look for ways in which we can improve energy and cost efficiency by advances in new technology.”

Earlier this year LCY was recognised for its commitment to reducing its carbon footprint and became Airport Carbon Accredited – the fourth in the UK.

It also bought an on-site fuel facility from oil giant BP in April this year.