ELN has picked up the inaugural Best Journalism award at the 2012 Scottish Green Energy Awards. The award ceremony took place in front of a packed house of a thousand […] 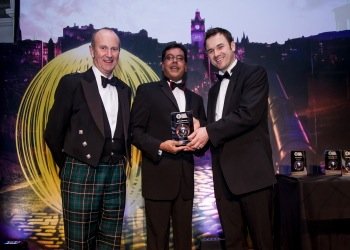 ELN has picked up the inaugural Best Journalism award at the 2012 Scottish Green Energy Awards.

The award ceremony took place in front of a packed house of a thousand people from some of the UK’s biggest names in green energy, including guest of honour, Business Secretary Vince Cable, at the illustrious National Museum of Scotland in Edinburgh.

ELN beat off stiff competition from the BBC and the Huffington Post to win the award for a TV report on the launch of the Saltire Prize filmed in Orkney earlier this year. ELN Editor Sumit Bose accepted the award, which was sponsored by Vattenfall, one of 11 handed out on the night in what is one of Scotland’s biggest awards events.

Sumit said: “For ELN which has only been around for just two and a half years to win such a prestigious award is testimony to the hard work of the team. We’ve always wanted to bring high quality TV production and journalism to our coverage of the energy sector and deliver the sort of sparkling content you’d expect to see on your telly from national broadcasters to your laptop or mobile. To be recognised for this by the judges proves how we’re achieving that goal.”

The report covering the launch of the Saltire Prize competition to establish the best form of marine energy was chosen for its balanced journalism and fantastic camera work shot by Christan Foden. It was filmed on location in Stromness on the Orkney mainland. The award follows hot on the heels of the success of ELN’s inaugural conference Energy Live 2012 last month.

The Scottish Green Energy Awards sponsored by RWE npower renewables and organised by Scottish Renewables is now in its 11th year. In his keynote speech the Business Secretary Vince Cable said: “The UK is a world leader in green energy, and Scotland is at the heart of this. From the work in the Orkneys on tidal wave energy to the new catapult centre in Glasgow, Scotland’s renewable energy industry is a vital part of the UK’s energy sector. The industry supports thousands of jobs and investment is on track to top £1 billion in 2012.”

Niall Stuart, Chief Executive of Scottish Renewables said: “The fact the Scottish Green Energy Awards has grown by some 50 per cent in just three years is also testament of the growth of the industry to become what is one of the largest corporate award ceremonies in the country. The renewables industry has a lot to celebrate and the Scottish Green Energy Awards is a great way for us to do just that.”

Sumit is pictured receiving the award from Jason Ormiston of Vattenfall along with MC Fred MacAulay.