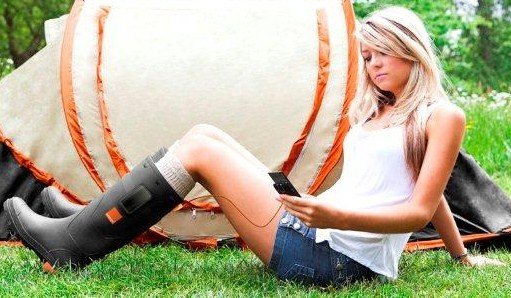 The boots, created in collaboration with renewable energy experts GotWind, use a unique ‘power generating sole’ that converts heat from your feet into an electrical current which can be used to charge a mobile phone. It is particularly suitable for festival goers as the hotter your feet get, the more energy you produce, so dancing is a perfect energy generator. At the end of the day, a phone can be plugged in to a power output at the top of the welly.

Inside the sole are thermoelectric modules constructed of pairs of p-type and n-type semiconductor materials forming a thermocouple. These thermocouples are connected electrically forming an array of multiple thermocouples (thermopile). They are then sandwiched between two thin ceramic wafers. When the heat from the foot is applied on the top side of the ceramic wafer and cold from the ground is applied on the opposite side, electricity is generated.

Nokia’s research centre in Cambridge is testing a prototype charging system which is able to power phones from radiowaves. So far they been able to harvest up to five milliwatts. Their goal is to reach 20 milliwatts, which is enough to keep phone in standby mode without having to recharge it, but it will not be enough to make or receive a call, as this requires around 50 milliwatts.

Nokia believes this technology could be employed with other energy harvesting technologies and could be on market in three to five years time.

Already on the market is Samsung’s Blue Earth. A solar panel located on the back of the phone can generate enough power to make calls.

Blue Earth, which is made from plastic recycled from water bottles, also has an eco walk function, an in-built pedometer which calculates how much CO2 emissions have been reduced by walking instead of travelling by transport and eqautes this information to the number of tres that would have been saved.

This unique function allows user to calculate the value of this footprint through the number of trees that have been saved.