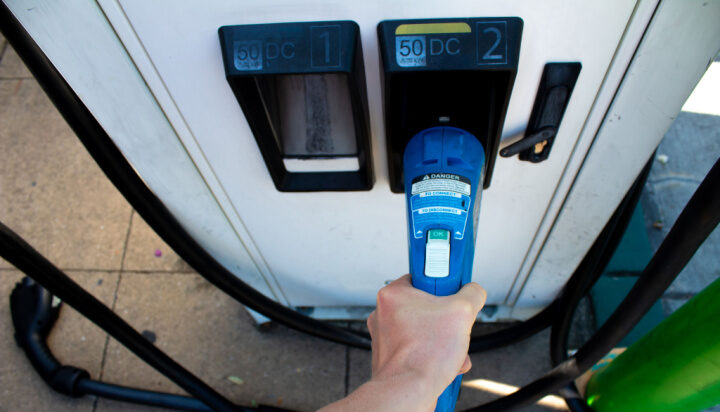 Destination charging at popular locations like supermarkets has become an important part of the country’s transition towards electric, providing drivers with a convenient place to charge their vehicle while they go about their daily lives.

Unlike petrol and diesel vehicles, which can be re-fuelled in a matter of minutes, EVs take at least 30 minutes to get a sufficient amount of charge. With the average shopper spending 45 minutes in store doing their grocery shop, supermarkets are an ideal location to ‘top up’ away from home.

Many supermarket groups are already investing in EV chargers. Yet there’s a growing question around whether the sector is responding quickly enough to meet the demands of a rapidly growing EV customer base.

According to Zap Map data, there are approximately 1,335 chargers at supermarkets which are free to use (This is subject to change following the recent announcement from PodPoint, that chargers at Tesco will no longer be free to use). However, a recent analysis by Drax found that the majority of supermarket stores still don’t offer any chargers, and those that do have an average of just two. These also tend to be concentrated in the inner-city supermarkets, meaning that drivers who live in more rural areas are disproportionally affected.

What’s more, the availability of EV chargers differs significantly across the different supermarket groups. Last year, the RAC and Zap Map published data which showed how certain chains are investing more heavily than others and at a quicker rate. Tesco, for example, has added a large number of EV charge points to its stores in recent years, putting it ahead of its closest EV charging rival ASDA. Morrison’s, however, offers the most EV charging facilities relative to the number of stores it has.

So, what more can supermarket groups be doing to help support their EV driving customers?

As a general rule of thumb, we’d recommend that all supermarket groups follow a ‘Green Ratio’ of 1 charge point for every 10 parking spaces. This is based on the government’s mandate of a 1 to 10 ratio in its Building Regulations for non-residential buildings. In addition to this, they should have cable routes for 1 in 5 of the total number of spaces, allowing them to scale up as required.

Installing EV charge points within your customer car park is about more than just a government mandate, though: there’s a real financial opportunity to unlock. Not only will it allow you to better serve existing customers, but it’ll also help to attract new ones.

Shoppers are also more likely to spend more during their visit if they’re waiting for their cars to charge. Combine this with any profits made from the connection rates and it’s easy to see the business benefits and return on investment.

Then, of course, there’s the social and environmental responsibility. If the UK is to decarbonise transport enough to reach net zero by 2050, then we need a huge increase in EV charging points. The Society of Motor Manufacturers and Traders estimates the UK will need 2.4 million charging points by 2030 alone.

Every business has an important role to play in helping our country to achieve this. If we’re to meet the 2050 deadline, the work needs to start now.

Drax Group’s purpose is to enable a zero-carbon, lower-cost energy future. In 2019 announced a world-leading ambition to be carbon negative by 2030, using bioenergy with carbon capture and storage (BECCS) technology.

Drax owns and operates a portfolio of renewable electricity generation assets in England and Scotland. The assets include the UK’s largest power station, based at Selby, North Yorkshire, which supplies five percent of the country’s electricity needs.

Having converted Drax Power Station to use sustainable biomass instead of coal, it has become the UK’s biggest renewable power generator and the largest decarbonisation project in Europe. It is also where Drax is piloting the groundbreaking negative emissions technology BECCS within its CCUS (Carbon Capture Utilisation and Storage) Incubation Area.

Its pumped storage, hydro and energy from waste assets in Scotland include Cruachan Power Station – a flexible pumped storage facility within the hollowed-out mountain Ben Cruachan.

The Group also aims to build on its BECCS innovation at Drax Power Station with a target to deliver 4 million tonnes of negative CO2 emissions each year from new-build BECCS outside of the UK by 2030 and is currently developing models for North American and European markets.

Pellet production and supply:
The Group has 17 operational pellet plants and developments with a nameplate production capacity of around 5 million tonnes annually.

Drax’s pellet plants supply biomass used at its own power station in North Yorkshire, England, to generate flexible, renewable power for the UK’s homes, businesses, and customers in Europe and Asia.

To find out more, go to the website www.energy.drax.com