During his speech at the climate summit, he said the government has put its money where its mouth is on climate change 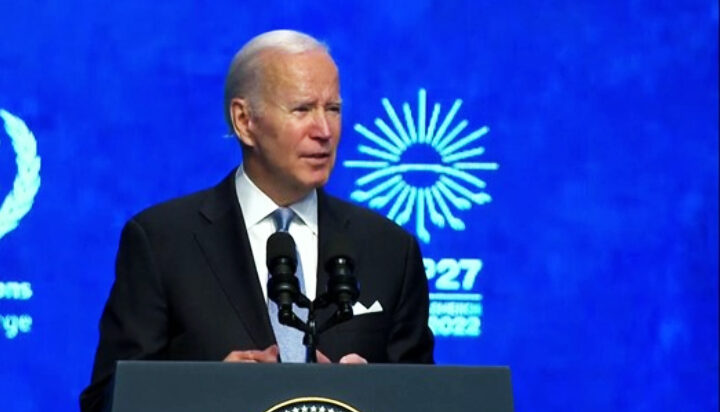 “I introduced the first piece of climate legislation to the United States Senate way back in 1986, 36 years ago. My commitment to this issue has been unwavering.

“Today, finally, thanks to the actions we’ve taken, I can stand here as President of the United States of America and say with confidence – the USA will meet our emissions targets by 2030.”

That’s what US President Joe Biden had to say in his speech on climate change at COP27.

He stressed that the US has become the first government to require its “major federal suppliers disclose their emissions and climate risks and set targets for themselves that are aligned with the Paris Agreement.”

Investment and finance were also clear areas of his speech: “With more than $650 billion (£553bn) in spending last year, the United States government is putting our money where our mouth is to strengthen accountability for climate risk and resilience. We’re proving a good climate policy is a good economic policy.”

Other world leaders at the conference, including Prime Minister Rishi Sunak, claimed that the ongoing situation with inflation and the Ukraine War should be seen as a reason to enhance climate action.

Biden shared this sentiment, saying these issues make it more important than ever that the world “doubles down on climate commitments.”

“Russia’s war only enhances the urgency of the need to transition the world off its dependence on fossil fuels. True energy security means that every nation can benefit from a clean, diversified energy future,” he added.

He explained that his Administration is ensuring the country is on course to achieve its Paris Agreement goal of reducing emissions by 50-52% by 2030 from 2005 levels.

Another commitment he announced was that by 2024, the US will provide $11 billion (£9.4bn) annually in climate finance and $3 billion (£2.5bn) for climate adaptation.

He said the country will “help more than half a billion people in developing countries respond to climate change.”

On the importance of COP and what it should represent, the President said: “This gathering must be a moment to recommit our future and our shared capacity to write a better story for the world.”

“The science is devastatingly clear. We have to make vital progress by the end of this decade.”