They have committed to develop an operational roadmap for 2023-24, with concrete joint actions agreed within six months 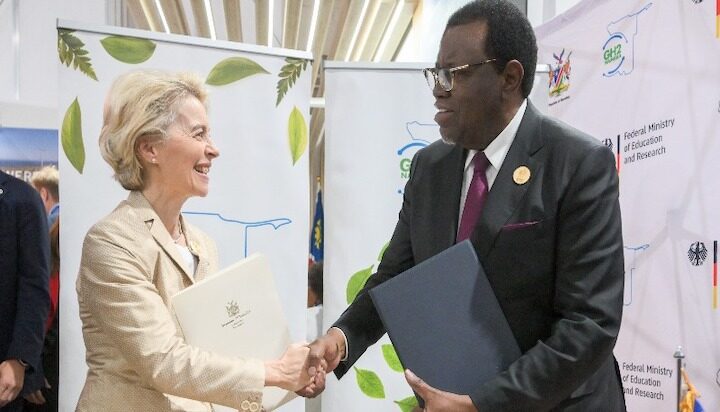 The European Commission and Namibia have established a strategic partnership on a sustainable supply of raw and refined materials and renewable hydrogen.

They signed a memorandum of understanding at the UN COP27 climate summit in Egypt this week, with the partnership expected to promote local value addition in Namibia by supporting the development of the mining and renewable hydrogen value chains.

The EU and Namibia have committed to develop an operational roadmap for 2023-24, with concrete joint actions agreed within six months.

The partnership will include co-operation to leverage environmental, social and governance (ESG) criteria and align with international standards, capacity building, training and skills development along raw materials and renewable hydrogen value chains as well as co-operation on research and innovation along the value chains.

Signed the 🇪🇺🇳🇦 agreement on raw materials and renewable hydrogen.

It will bring 🇪🇺 closer to our climate goals.

It will create jobs and growth in 🇳🇦

Both of us will benefit; that’s the EU way of doing business.#GlobalGateway pic.twitter.com/DkC4K8JvRP

President of the Commission Ursula von der Leyen said: “I am so glad to sign this agreement between the EU and Namibia for the development of raw materials value chains and renewable hydrogen. This is not only a huge step forward for the EU’s climate ambitions but also an agreement beneficial to Namibia, a front-runner in the development of renewable hydrogen in Africa. It shows Europe’s commitment to work with partner countries on our shared commitments to a greener and more resilient future in line with the Global Gateway Strategy.

“I would like to thank President [Hage] Geingob for his commitment and look forward to our cooperation. This partnership is a key step in strengthening relations between the EU and Namibia, based on mutual trust, deepened political dialogue and concrete cooperation projects.”

The EU also announced a partnership with Kazakhstan on raw materials, batteries and renewable hydrogen at the climate summit.

In addition, the European Investment Bank (EIB) and Namibia have signed a joint declaration to deepen their co-operation in support of renewable energy, including renewable hydrogen.

They will work towards the implementation of a loan by EIB Global to the Government of Namibia of up to €500 million.