“Get real” on climate action is the message to wealthier countries 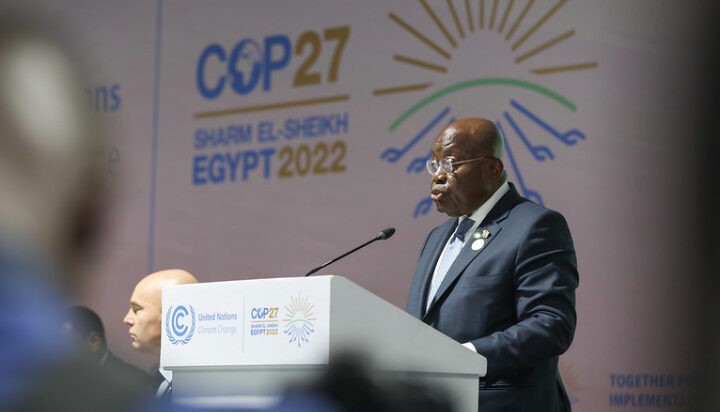 “No one will win if Africa loses.”

That was the statement made to world leaders at COP27 by Ghanaian President Nana Akufo-Addo, who implored the rest of the world to give the continent the money it needs to combat climate change.

This sentiment was echoed by many leaders from developing nations, with Bahamas Prime Minister Philip Davis posing the question: “What is it worth to you to have millions of climate refugees to turn into tens of millions, putting pressure on political and economic systems around the world.”

Due to its location and low-lying nature, the Caribbean nation is highly susceptible to sea-level rises and storms – which have all increased in recent years.

“We are children of survivors of that man-made tragedy. We have a duty to fight for survival as they fought so desperately for theirs,” Davis added – before asking the developed nations to “get real” when it comes to climate finance.

Hage Geingob, the Namibian President, labelled the role of wealthier countries in the climate crisis “criminal.”

However, the blame for climate change was also very much laid at the door of fossil fuel companies, with Antigua and Barbuda PM Gaston Browne stating: “We all know they make extortionate profits.”

Pacific nations truly bearing the brunt of climate impacts called for a treaty to be signed to mark the end of fossil fuels.

Tuvalu PM Kausea Natano stressed: “The climate emergency can be reduced to two basic concepts – time and temperature. It’s getting too hot and there is barely time to slow and reverse it.”

Another country hit heavily by climate change this year was Pakistan, with floods killing more than 1,500 people.

Pakistani PM Shehbaz Sharif said that nations are currently “trapped in a crisis of public financing fuelled by debt and yet have to fund climate disasters on their own. This is simply unjust and unfair to say the least.”

Certain nations have already agreed to increase climate finance, with the UK’s Foreign Secretary James Cleverly announcing that the country would look to provide more than £100 million to nations in need within the coming years.

Prime Minister Rishi Sunak also revealed in his speech that funding for climate adaptation was being increased from £500 million to £1.5 billion by 2025.