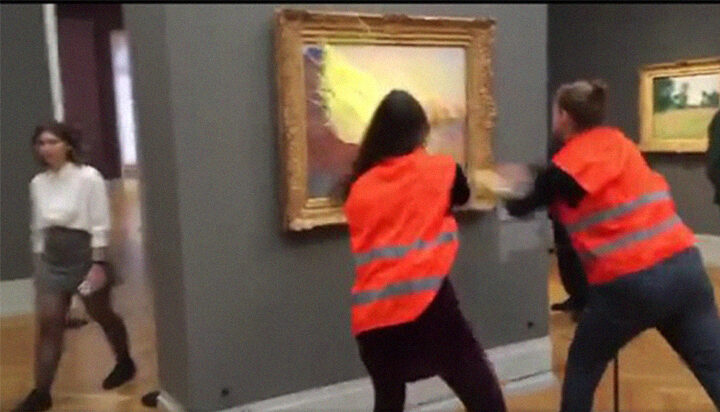 Monet’s work has become the next victim of food damaging protests after Van Gogh – as German climate protestors threw mashed potato over one of his paintings on Sunday.

The £96 million piece was up in a Potsdam Museum – and has been vandalised just over a week after Van Gogh’s Sunflowers in London’s National Gallery had tomato soup poured across it by Just Stop Oil.

Monet’s Les Meules fell victim to the German climate group Letzte Generation, as two protestors threw the liquefied potato at the piece and then glued themselves to the wall.

One of the protestors said: “We are in a climate catastrophe and all you are afraid of is tomato soup or mashed potatoes on a painting. You know what I’m afraid of? I’m afraid because science tells us that we won’t be able to feed our families in 2050.

The German stunt followed a largely failed attempt from another climate group gluing themselves to Volkswagen’s building in Wolfsburg earlier in the week, before leaving for medical reasons and a lack of access to the toilet.

Letzte Generation released a statement reading: “If it takes pelting a painting with mashed potato or tomato soup to remind society that the fossil course is killing us all, then we give you mashed potato on a painting.”

The museum’s spokesperson assured that the painting had not been damaged, as it was protected by glass – and that the protestors were removed from the wall relatively easily, as the police arrived quickly to stop the act.

Letzte Generation translates to ‘Last Generation,’ and the group say they chose the name as they feel they are the last generation who can prevent society’s collapse.

They state they are outraged by the German government’s refusal to listen to warnings about the damage fossil fuels are doing to the environment and what it could mean for the world’s future.