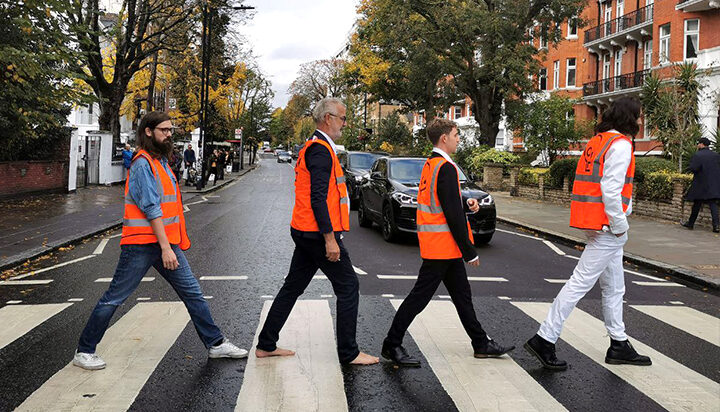 The group’s next stunt saw four of its members walk onto the zebra crossing that the Fab Four walked across for the front cover of their iconic 1969 album – they then stood as statues at the crossing blocking traffic.

The protestors then adopted high-vis jackets and held a Just Stop Oil banner, whilst blocking the road.

“Here we are, in his spirit, saying that what we do in the next three years will determine the future of humanity. Let’s not sleepwalk into the furnace; let’s face our fears and act with love and courage to save all the wonderful culture humankind has created.”

Just Stop Oil claims the act was done as another attempt to raise awareness of their cause – but the response online was mixed.

One user tweeted “How does this stop oil?,” while another responded “LOOK AT ME, LOOK AT ME !!! Will it change government policy? Not one iota. Why not target something useful other than ordinary people going about their daily business?”

However, supporters of the group’s action clapped back at these statements stating that the responses from people are a “prime example” of how their protests are working.