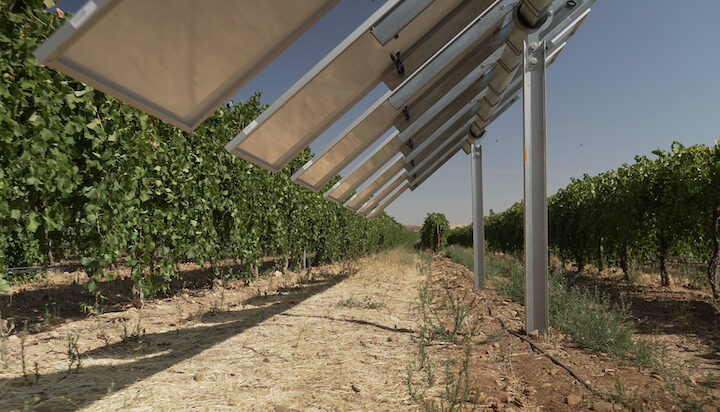 An agrivoltaic plant claimed to be the first of its kind in Spain has been opened by Iberdrola in Toledo.

The 40kW Winesolar pilot project, located in the González Byass and Grupo Emperador vineyards located in the town of Guadamur, will be used entirely to power the wineries, helping support decarbonisation and reduce energy costs.

Agrivoltaics or dual-use solar is the simultaneous use of areas of land for both solar power generation and agriculture.

The project allows the layout of the solar modules to be adapted to the needs of the vineyards in order to regulate sun exposure and temperature using the shade provided by the panels.

The special trackers are controlled by an artificial intelligence algorithm capable of determining the optimum position of the solar panels in relation to the vines at any given moment.

The degree of inclination is established according to the information collected by the sensors placed in the vineyards, which record data relating to solar radiation, soil humidity, wind conditions and the thickness of the vine trunk, among others.

The project aims to contribute towards improving the quality of the grapes, allow for a more efficient use of the land, reduce irrigation water consumption and improve the crop’s resistance to climatic conditions in the face of rising temperatures and increasingly frequent heat waves.

Iberdrola will monitor the results of the project over the next year, which will enable it to continue adapting the innovative system, with plans to replicate it on other vineyards in Spain, which accounts for 13% of the world’s vineyards.