The lorry is expected to replace around 30,000 miles per year of diesel with green energy, helping remove around 23 tonnes of carbon emissions per year 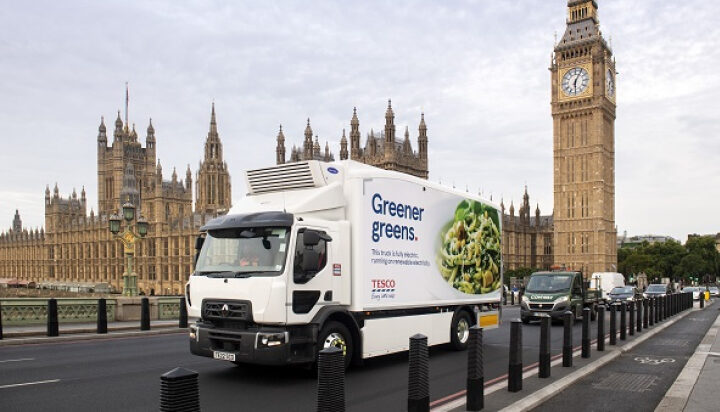 Tesco has rolled out a zero-emission electric lorry to make deliveries from its distribution centres to stores in city centres.

The lorry, manufactured by Renault Trucks, is delivering to more than 400 stores in Greater London, with further lorries of its kind to enter service in the coming months.

It has a range of up to 130 miles and is able to carry the same payload as the diesel truck it replaces and is charged up at its Dagenham distribution centre.

The electric lorry is expected to replace around 30,000 miles per year of diesel with green energy, helping remove around 23 tonnes of carbon emissions per year.

Jason Tarry, Tesco UK and ROI CEO said: “We all want to see improved air quality and less pollution in our towns and cities and electric vehicles will play a crucial role in achieving this. The Tesco distribution network is one of the largest in the UK and provides us with a great opportunity to roll out new technologies like this industry-leading E Tech electric truck from Renault Trucks.

“Together with our switch to electric home delivery vans and rolling out electric vehicle charging points for our customers, we’re really excited about the improvements we’re making across our business and our transition to electric vehicles.”

The supermarket is also working with Volta Trucks on a prototype fully electric lorry, designed to tackle emissions in urban areas.