‘Block Brazilian gold to save the Amazon’ 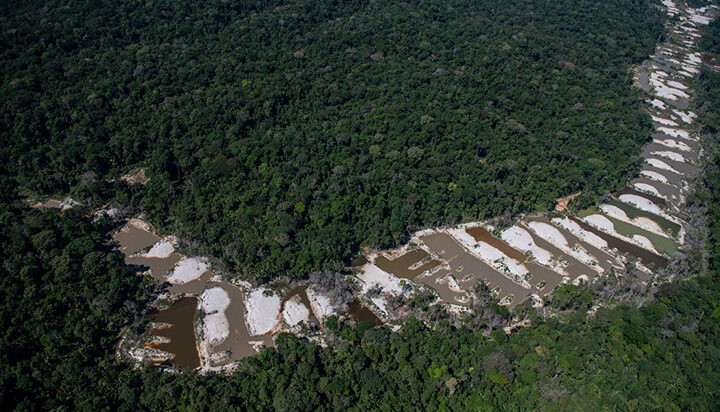 The UK should ban the import of gold from Brazil, as it’s responsible for the deforestation of the Amazon.

That’s the claim of charity WWF, which is calling for the ban to be in place until gold can be proven to not be linked to the degradation of wildlife or acquired through illegal means.

The NGO has released the below images, alleging that these demonstrate the presence of illegal mining in the Brazilian Amazon – which are fuelling deforestation and pollution.

Gold constitutes 25% of Brazilian goods exported to the UK, with the price rising in the last two years, leading to a desire to mine more of the precious metal.

WWF claims that between 2010 and 2020, mining within indigenous landscapes in Brazil grew by 495% and by 301% in conservation areas – damaging wildlife and polluting waters.

The main pollution witnessed from the mines is the increase in mercury levels in habitats; used to extract goal and then ending up in rivers and killing fish, the NGO states.

Mike Barrett, Executive Director of Science and Conservation at WWF, said: “What happens in the Amazon doesn’t stay there. People and nature across the world are already feeling the effects of the climate crisis and as the UK swelters under unprecedented temperatures this week it is a stark reminder of the future we all face if we fail to address the destruction of precious landscapes like the Amazon.

“If the UK government is serious about tackling deforestation and delivering the promises made at COP26, then it must act now and ban the import of Brazilian gold until it can be proven that it’s not sourced from illegal and deforesting gold production.”

The Department for International Trade has been contacted for a response.