The company chose a site with 18,000 solar panels when it began operations in 2018 and started using wind energy this year, bringing its reliance on renewable energy to 100% 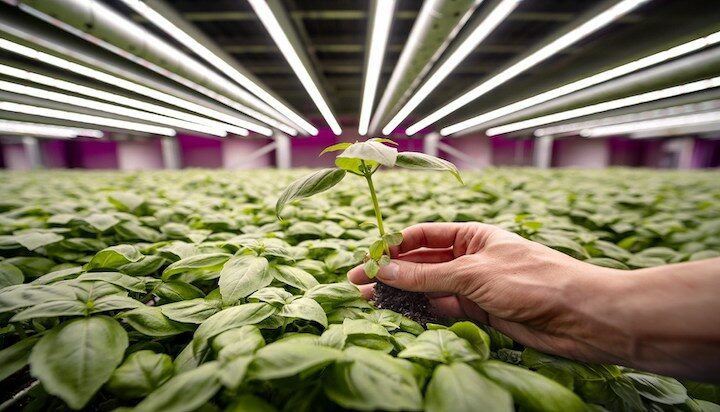 However, vertical farming in a controlled indoor environment can be energy-intensive.

Future Crops is now using renewable sources such as solar and wind to power its operations.

The company chose a site with 18,000 solar panels when it began operations in 2018 and started using wind energy this year, bringing its reliance on renewable energy to 100%.

In addition, all its resources are reused and recycled, including 97% of the water.

Gary Grinspan, Co-founder and CEO of Future Crops said: “Vertical farming is an emerging industry that is gaining traction due to its multiple virtues.

“We are able to grow tremendous amounts of high-value food on a much smaller stretch of land – approximately 5% of the land required for conventional agriculture. And having no reliance on seasonality amplifies growing cycles tenfold. This means we can grow more, faster while concurrently cutting the food mileage. Our produce also has a naturally longer shelf-life which cuts food waste and eliminates ecotoxicity to people and the earth since no pesticides or harmful chemicals are required.

“The Future Crops system also addresses the downside of the controlled indoor methods of growing crops: high energy consumption due to crops being unable to soak up natural sunlight.”

He added: “We bolstered our farm’s infrastructure and insulation capabilities. We also sought solutions to further improve our cultivation processes to be more energy efficient, including boosting yields. At the same time, we began a gradual migration to renewable energy.”