The global headquarters at 270 Park Avenue, a 60-storey skyscraper, is expected to be New York City’s largest all-electric tower with net zero operational emissions and exceed the highest standards in sustainability 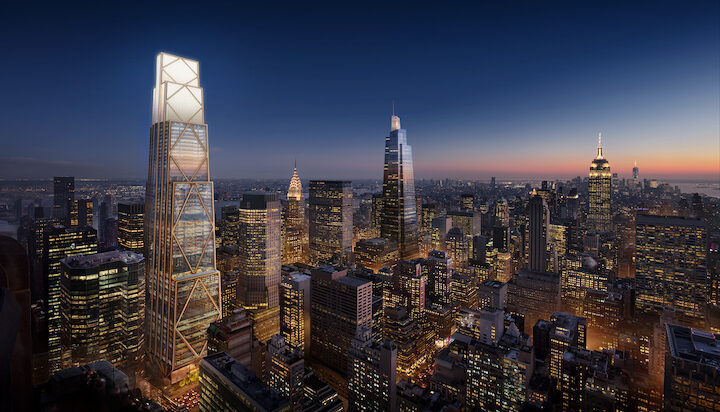 JPMorgan Chase has unveiled plans for its new headquarters that will be New York City’s largest all-electric building with net zero operational emissions.

The global headquarters at 270 Park Avenue, a 60-storey skyscraper designed by Foster + Partners, is expected to exceed the highest standards in sustainability, health and wellness and “help define the modern workspace” with 21st century infrastructure and smart technology.

It will be 100% powered by renewable energy and use intelligent building technology with sensors, AI and machine learning systems to predict, respond and adapt to energy needs.

Advanced water storage and reuse systems will also be installed to reduce water consumption by more than 40%, in addition to triple pane glazing on the facade and automatic solar shades connected to HVAC systems for greater energy efficiency.

The outdoor terraces will feature natural green space and plantings.

JPMorgan Chase said it also recycled, reused or upcycled 97% of the building materials from the demolition – far exceeding the 75% requirement of the leading green building standard.

Jamie Dimon, Chairman and Chief Executive Officer of JPMorgan Chase said: “With our new headquarters, JPMorgan Chase is making a long term investment in our business and New York City’s future while ensuring that we operate in a highly efficient and world-class environment for the 21st century.

“We are extremely excited about the building’s state-of-the-art technology, health and wellness amenities and public spaces, among many other features. It is in the best location in one of the world’s greatest cities.”

New York City Mayor Eric Adams added: “New York City’s central business districts were hit hard by the pandemic and restoring their vibrance is an integral part of our blueprint for an equitable economic recovery.

“This investment by JPMorgan Chase not only reflects their commitment to keeping and growing good jobs in New York City, it will also catalyse additional investment and new office space throughout Midtown East. And by incorporating sustainable design into the building, they are helping our city prepare for and mitigate the impacts of climate change.”