KFC under fire for chicken farming 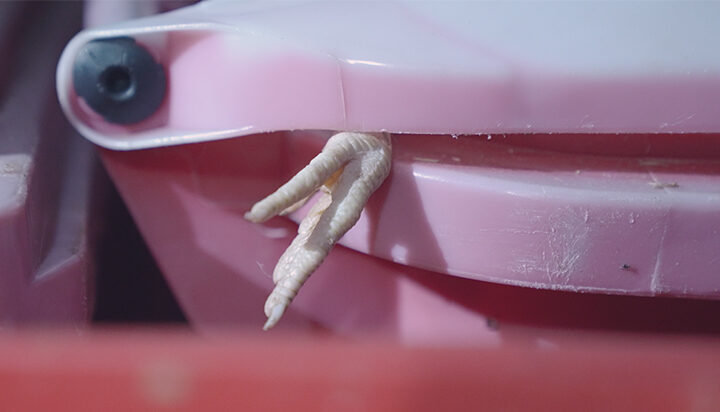 A photo shared by VFC showing a dead chicken in a bin - Image: VFC

KFC has been criticised of ‘misleading’ the public when it comes to the condition of its chicken farms.

In the video below, which has amassed more than one million views on Twitter alone, the animals are shown to have fresh straw in the shed and plenty of room to roam into.

However, undercover activists working for vegan food brand VFC have revealed that when they visited the same farm in February, they found the birds to be in extremely crowded conditions, with very little fresh straw, surrounded by the carcasses of many other sick or malnourished chickens.

The footage published by VFC shows animal faeces littered across the ground, as well as bins containing dead birds.

In the video mentioned previously, the farmer Tony explains: “We’re very proud of our animal welfare here, giving the birds plenty of room to roam.”

Although, the vegan food brand claims its new secretly-acquired footage provides evidence to the contrary.

Co-Founder of VFC, Matthew Glover, said: “This is the most disingenuous marketing campaign we have seen for a long time. This portrayal of chicken farming is utterly misleading and seeks to reassure the public that all is well, when nothing could be further from the truth.”

JOE Media stated that the filming conducted for KFC detailed the conditions witnessed on the day.

Moy Park, which operates the farm in question, stated: “Claims such as these are treated incredibly seriously and we immediately reviewed the footage along with independent audits and veterinary reports.

“This farm is managed to a very high standard and our preliminary findings show that it is meeting those standards. The birds are displaying natural behaviours and the farm adheres to all stocking, enrichment and welfare requirements. We aim to give our birds the best possible care.”

future Net Zero has approached KFC and Upload Agency, which represents Niko Omilana for a response.