The project supports the Canary Wharf Group’s sustainability commitments, which includes a 49% reduction in Scope 1 and 2 emissions since 2012 and achieving net zero by 2030 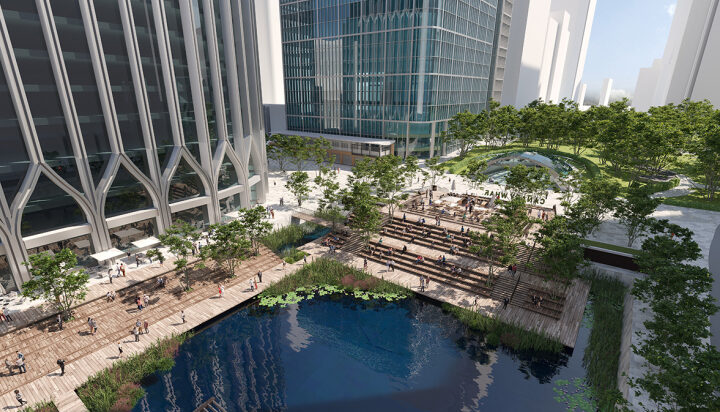 Canary Wharf has struck a partnership with the Cornwall-based social enterprise Eden Project for an eco-makeover of the financial district.

The “ground-breaking” partnership aims to create a model of how biodiversity can thrive in urban environments, with the first project creating a “green spine” through the centre of the Canary Wharf estate with additional green public realm, parks and gardens and waterside access.

Through the collaboration, the Canary Wharf Group (CWG) and the Eden Project intend to share what they learn to help other cities around the world to act on biodiversity loss.

The project, which will be assisted by Glenn Howells Architects, supports CGW’s sustainability commitments, which includes a 49% reduction in Scope 1 and 2 emissions since 2012 and achieving net zero by 2030.

CWG has been purchasing 100% of its electricity from renewable energy sources since 2012 and has sent no waste to landfill since 2009.

Shobi Khan, CEO, CWG said: “Our urbanising world cannot become sustainable until cities work for nature as well as people. In partnering with biodiversity expert, the Eden Project, CWG will accelerate thinking and action on how urban environments can be re-designed with nature at the heart.

“Sustainability has been front and centre for CWG’s buildings over the last 20 years. We already have over 20 acres of parks and gardens and 5km of waterside paths. Our partnership with the Eden Project will ensure these spaces and new areas support the ecosystems that people and nature depend on as we bring transformational change to the estate.”