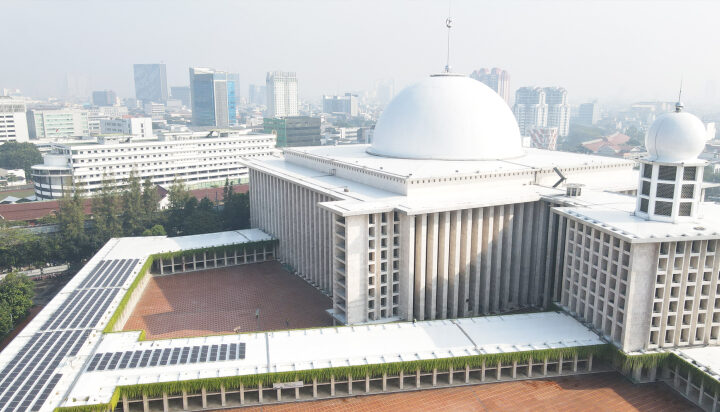 The national mosque in Indonesia has undergone a green retrofit that is expected to significantly reduce its carbon footprint.

The Istiqlal Mosque in Central Jakarta, which has installed energy-saving and environmentally- friendly technologies, has also become the “first place of worship in the world” to be awarded the final certification under the EDGE (Excellence in Design for Greater Efficiencies) system.

Some of the installations at the mosque include efficient lighting, smart energy meters, reflective paint for the roof and external walls as well as solar panels that cover more than 13% of its electricity consumption, expected to help the mosque see energy savings of 23%.

The use of low-flow faucets, grey water treatment, recycling and other efficiency measures will also reduce overall water consumption by as much as 36%.

The work undertaken at the mosque is expected to set an example to encourage the uptake of green design practices in Indonesia and elsewhere, in addition to helping the fight against climate change.

The Istiqlal Mosque Management Agency (BPMI), Green Building Council of Indonesia (GBC Indonesia) and Indonesia’s Ministry of Public Work and Housing partnered with IFC to redevelop the mosque to add the green features.

Prof. Nasaruddin Umar, High Priest of the Istiqlal Mosque said: “Muslims feel a strong imperative to for mosques to go green to enhance the quality of their worship and honour the leadership of the Rasulullah SAW who insisted on the need to protect the environment. Thus, redeveloping the mosque to make it a centre of enlightenment for environmental protection has been one of our priorities.

“We are very honoured that it has become the world’s first mosque to be awarded final certification from EDGE. This remarkable achievement is clear evidence of our commitment to promoting conservation efforts both at the Istiqlal Mosque and across the country.”