The new plant could capture an average of one and a half million tonnes of CO2 a year, which would represent at least 5% of the UK Government’s 2030 target for carbon capture and storage 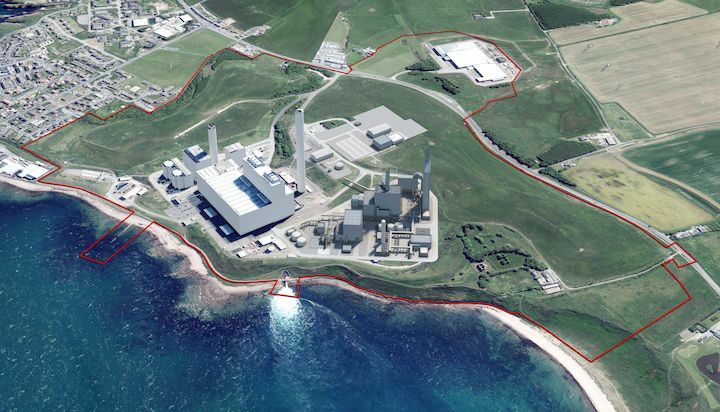 Visualisation of the proposed carbon capture facility next to the existing power plant. Image: SSE Thermal/Equinor

SSE Thermal and Equinor have submitted a planning application for a new carbon capture power station in Peterhead, Scotland.

The proposed Peterhead Carbon Capture Power Station, located on the Aberdeenshire Coast next to the existing plant, would have a total capacity of 910MW and become Scotland’s first power plant equipped with a carbon capture facility to remove CO2 from its emissions.

The new power plant could capture an average of one and a half million tonnes of CO2 a year, which would represent at least 5% of the UK Government’s 2030 target for carbon capture and storage (CCS).

It would connect to the Scottish Cluster’s CO2 transport and storage infrastructure, which underpins plans to deliver one of the UK’s first low carbon industrial clusters.

SSE Thermal and Equinor suggest the Peterhead site is ideally placed to access the Acorn storage site in the North Sea, which will be used to safely store the carbon from emitters in the Scottish Cluster.

The companies expect the carbon capture plant to be operational as early as 2027 with the necessary policy mechanisms and infrastructure in place and with the Scottish Cluster supported by the UK Government.

Martin Pibworth, SSE’s Group Energy and Commercial Director said: “Peterhead Carbon Capture Power Station could provide flexible low carbon power while backing up the renewables-led system and will be crucial to a secure energy future for Scotland and the UK.

“By delivering the proposed new station with Equinor we can not only support a secure and affordable transition to net zero, we can also maximise the benefits of the low carbon revolution for workers and communities in the north-east of Scotland. Projects such as this underline our wider commitment to delivering on decarbonisation targets, with SSE investing £12.5bn to 2026 to power the UK’s energy transition through our Net Zero Acceleration Programme.”