Oil protestor ties himself to goalposts in Premier League fixture 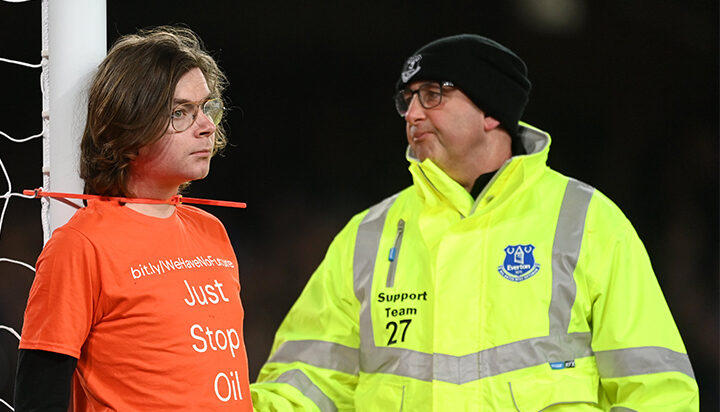 During Everton’s Premier League clash with Newcastle United last night, a protestor tied himself to the goalposts to protest the oil and gas industry.

A 21-year-old man managed to secure a cable-tie between his neck and the goalposts at Goodison Park, sporting an orange t-shirt that read ‘Just Stop Oil’.

Just Stop Oil are a campaign group that are calling on the UK government to stop all new plans for oil fields this year, condemning the use of fossil fuels and mobilising people to fight climate change.

Louis McKechnie, a mechanical engineering student, revealed his reasons for the protest on the campaign group’s Instagram. He stated: “I believe as many people as possible need to know what a possible future holds.”

He describes this future as follows: “as countries become too hot to live in, [there will be] mass starvation due to crop failure, fighting for bread”.

“The cost of living crisis, COVID and the war in Ukraine are showcasing this future. I want my government to do all they can to stop this coming true – but they are expanding oil and gas, making things worse, increasing the risk,” he said.

This follows a similar attempt at Arsenal’s match against Liverpool the previous day for a protestor to attach themselves to the goalposts, however, on that occasion the stunt was not successful.

Safety officers and stewards flocked around the young protestor in an attempt to free him and had to resort to heavy cable cutters to break the lock.

This evening, Louis, a 21 year-old supporter of Just Stop Oil, locked on to the goalpost at Goodison Park wearing a Just Stop Oil t-shirt, causing the referee to briefly stop play.

When explaining why he has chosen this action, Louis said: pic.twitter.com/XqjaYFIDyz

The campaign group claimed responsibility for the protest, tweeting: “This evening, Louis, a 21-year-old supporter of Just Stop Oil, locked on to the goalpost at Goodison Park wearing a Just Stop Oil t-shirt, causing the referee to briefly stop play.”

Reports have also surfaced that McKechnie was also previously involved with climate campaign group Insulate Britain, gluing himself to the M25 last year.

At the time of the break in play, the game was goalless, however, ended in emphatic scenes for the Toffees – securing a victory with a winner nine minutes into injury time.