Once fully completed, it will produce at least 300 tonnes of green hydrogen per year 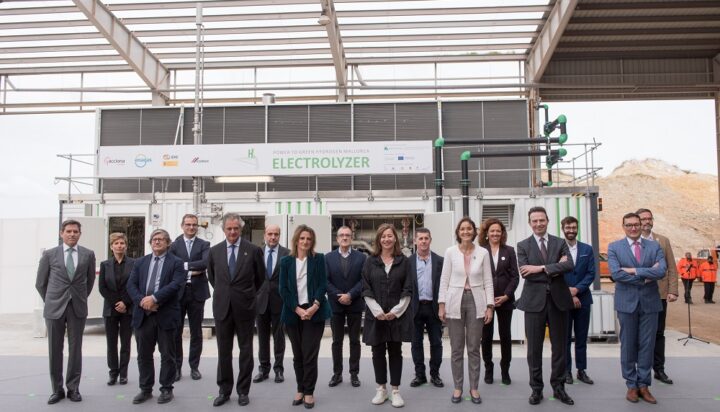 An industrial renewable hydrogen plant, claimed to be the first of its kind in Spain, has been inaugurated in Mallorca.

The Green Hysland project, part of the Power to Green Hydrogen Mallorca project, led by Enagás and ACCIONA Energía, in partnership with IDAE and CEMEX, was supported with an EU grant of €10 million (£8.4m) from the Clean Hydrogen Partnership.

Green Hysland aims to deploy a fully-functioning hydrogen ecosystem in the island of Mallorca, turning it into Europe’s first hydrogen hub in Southern Europe.

It will be achieved by producing green hydrogen from solar energy and delivering it to end users such as the island’s tourism, transport, industry and energy sectors, including gas grid injection for heat and power use.

Teresa Ribera, Vice President of the Spanish Government and Minister for Ecological Transition and Demographic Challenge said: “This pioneering project inaugurates a technological development that will be very relevant in the coming years, to replace gas of fossil origin with renewable gases, such as biogas, biomethane and hydrogen obtained with renewable energies.

“Thanks to these advances, which we are promoting with the PERTE ERHA (Recovery, Transformation and Resilience Plan), we will reduce our dependence on hydrocarbon imports, we will offer a solution for the decarbonisation of sectors that are difficult to electrify, such as industry or heavy transport and we will create new companies and new jobs. Now, more than ever, we must activate all the possibilities to gain energy sovereignty and renewable energies are going to play a decisive role. And among them, hydrogen constitutes a strategic bet for the country.”