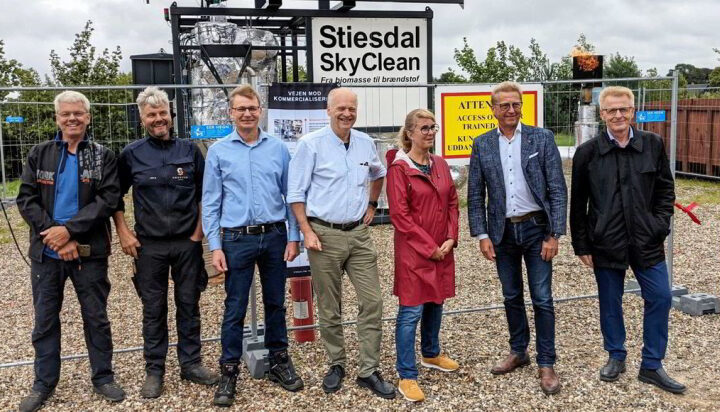 A prototype of an innovative plant to accelerate the development of carbon-negative green fuels has been launched by Stiesdal Fuel Technologies (SFT).

It is part of a planned phase in the scaling of the company’s SkyClean technology, a pyrolysis process that both captures and stores CO2 and produces green fuels.

Organic waste from agriculture and forestry is converted into biochar, gas and oil by heating to a high temperature without the presence of oxygen.

Dry plant material typically contains around 50% carbon that has been extracted from the atmosphere in the form of CO2 by the plants.

In the pyrolysis process, half of the carbon in the waste is converted to biochar while the other half becomes oil and gas – the gas can be used as fuel in the supply of heat and in industry and the oil can be refined into fuel for the transportation sector, including aircrafts.

The test plant, built by SmedTek, a small Danish agriculture machine shop, has a capacity of 200kW and can treat 500 tons of agricultural waste annually, helping reduce CO2 by around 600 tons.

SFT estimates SkyClean has the potential to provide a reduction of 12 million tons of CO2 equivalent for Denmark.

The prototype is an important part of SFT’s plans to develop a much larger 2MW plant – with a DKK20 million (£2.3m) investment – which is expected to be start being established later this autumn.

Henrik Stiesdal, CEO of Stiesdal said: “We are very happy to take the new plant into use. The plant is an important stepping stone for us in the development of the processes in SkyClean and it has been a pleasure to see SmedTek build what is for them a completely new type of industrial plant in a very short time.

“The UN’s new climate report emphasises that speed matters. We know that SkyClean can provide both CO2 reduction and jobs and we know that it is urgent to get this type of climate solution on track if we are to avert the worst effects of global warming in time. SmedTek has delivered at the necessary speed and we hope to be able to maintain the pace in the next steps towards commercialisation.”