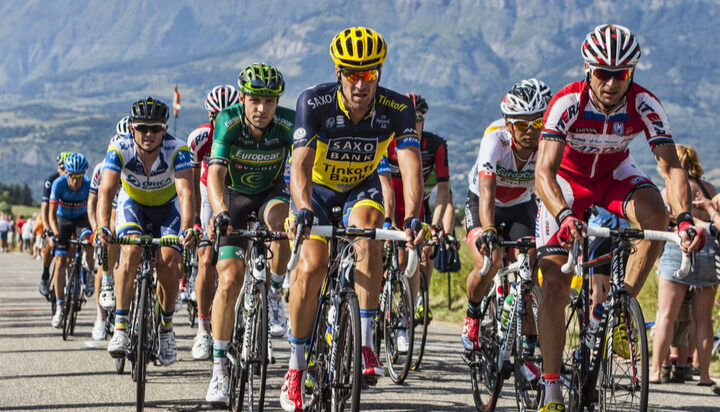 This year’s Tour de France comes to an end on Sunday – but its cycle of environmental impacts does not.

The competition first made its position on climate action clear in 2017, when it became a founding member of the Ministry of Sports and WWF’s charter of 15 eco-friendly commitments.

These commitments included a minimum of 50% sustainable food, 80% of journeys made using active mobility, public transport or car sharing and a 25% reduction in waste.

For the 2021 competition, the Tour de France took further action. It ensured all the organisers’ race vehicles were hybrid for the first time, as well as providing fully electric publicity caravans and VIP vehicles.

In terms of plastic waste, 100% of the plastic packaging for promotional items was eliminated unless necessary for hygiene reasons. Single-use plastic glasses were replaced with reusable glass, with coffee cups made from recycled cardboard.

The Tour de France also committed to promoting cycling to its worldwide viewers and specifically the French public. It claims that although 60% of travel in France covers distances less than 5km only 4% of this travel is carried out by bicycle.

Professional cyclist Michael Woods, who has been competing in this year’s Tour de France also spoke in a recent interview on ITV4 on climate action and how cycling can influence change:

“Thinking and reflecting on my life as a pro-cyclist, I have a big footprint from a carbon perspective because of it.

“It’s been incredible over the last 10 years, seeing the greater amounts of heat and the higher instances of storms, storm surges, it doesn’t take a fool to realise that the climate is dramatically changing and we are playing a big role in that.

“Where the real change in climate is going to happen is through policy.

“We’re the tip of the spear in the world tour and we should be the example for everybody. Cycling is, as an activity, one of the most carbon-neutral things you can do”.