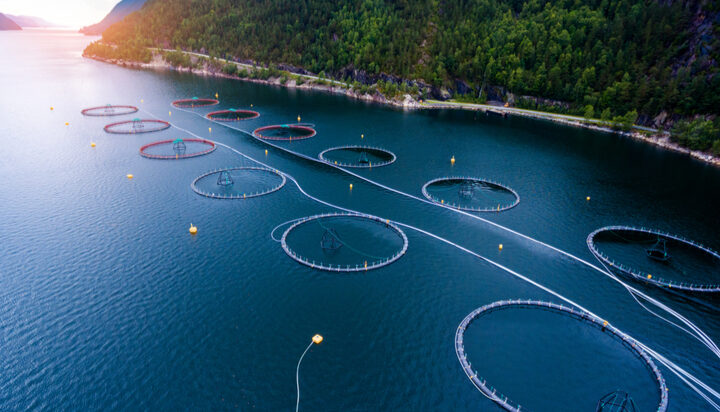 Eating farm-raised salmon can contribute to a lower carbon footprint.

That is according to a new sustainability report from the Global Salmon Initiative (GSI), which represents 40% of the salmon farming sector.

It has revealed that farmed salmon have a relatively low carbon footprint, not needing many resources for diet and consumption.

The carbon footprint was calculated based on a serving of 40g protein compared with other meats – the report showed that farmed salmon have a carbon dioxide equivalent (CO2e) footprint of 0.6 compared to 5.92 for beef, 1.3 for pork and 0.88 for chicken.

The Aquaculture Stewardship Council (ASC) certifies salmon if it is responsibly farmed and the GSI has reported a positive trend in the sustainability of salmon farming in the last eight years.

The GSI has stated that its members produced 420,000 tonnes of ASC-certified salmon in 2020, up from zero in 2013. It has also found that since 2013, average antibiotic use on fish among its members dropped by 60%, improving the health of the salmon and sustainability of the farming process.

Sophie Ryan, CEO at the GSI, said: “The question we have to ask ourselves today is how we can develop a food system that provides the amount of healthy food we need while not destroying our planet.

“Salmon farming alone will not be the answer but done right, it is definitely part of the solution. Our job now is to get it right. Within GSI we have created a framework to drive the necessary improvements industry-wide at speed and scale and this report shows us where and how.

“The findings are not just for our stakeholders, but for our own members as we hold each other accountable and identify where we collectively need to work harder.”