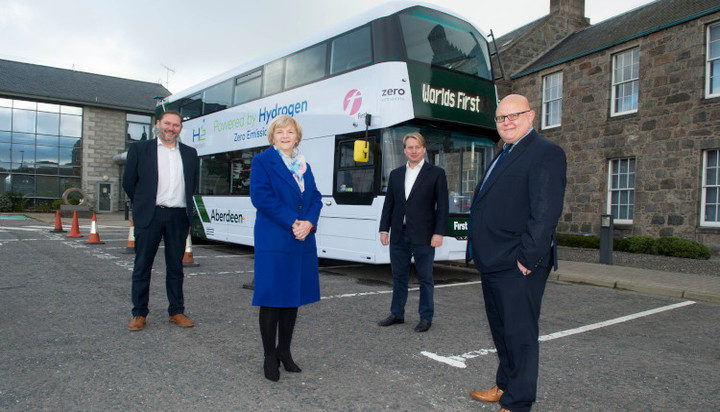 The ‘world’s first’ zero emission hydrogen double-decker buses have been operating in Aberdeen throughout the last week.

The buses are built by Wrightbus and powered by Luxfer Gas Cylinders’ hydrogen fuel system. The announcement follows Prime Minister Boris Johnson’s pledge for the country to become net zero by 2050.

The buses mark the start of a €32 million (£28m) investment from the EU in the Joint Initiative for hydrogen Vehicles across Europe (JIVE) project. The project will see 139 hydrogen-powered buses across five countries. In the UK they will be deployed in Aberdeen, Liverpool, Birmingham and London.

The buses will be powered by Luxfer’s G-Stor H2 hydrogen cylinders. Luxfer says 150,000 of the cylinders are in circulation worldwide and currently power 10,000 compressed natural gas buses, with the aim to shift to hydrogen double-deckers over the next few years.

Director at Luxfer Gas Cylinders, Mark Lawday said: “The hydrogen economy is now taking off, but it’s an area we’ve worked in for three decades. Luxfer has pioneered hydrogen storage systems and valve technology, and we were brought into this project by Wrightbus in 2017 to help design how the hydrogen system could work to deliver the best range, in a cost-effective solution.

“Aberdeen has been at the forefront of hydrogen, proving it is viable, and we worked with them on introducing an original fleet of 10 hydrogen buses to the city too. It’s fantastic that these new double-deckers will begin their journeys with passengers soon.”