She said: ‘There is a huge journey to go on and by the time we publish the Net Zero Strategy ahead of COP26, we’ll have a much more detailed picture of what that route map looks like’ 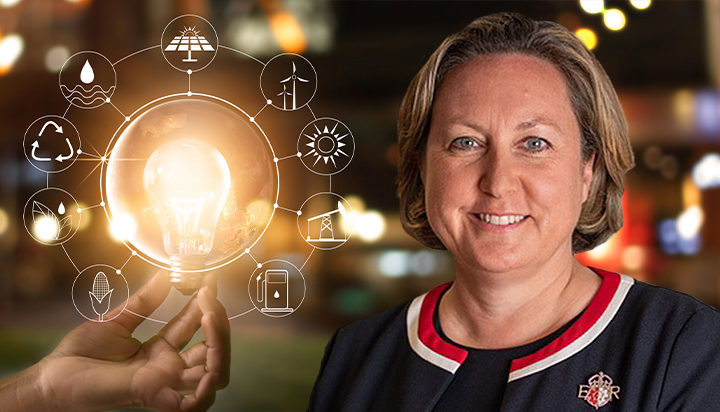 The UK’s new Energy Minister, Anne-Marie Trevelyan, has set out the key priorities she aims to deliver in the role.

She has said she expects to see “significant progress” made over the next two years in terms of tackling climate change and delivering the promises set out in the government’s long-awaited Energy White Paper, which was released just before Christmas.

As well as confirming offshore wind and other renewable energy technologies “are at the very top of her list”, she said features of the Energy White Paper such as establishing a fully-operational Carbon Capture, Usage and Storage (CCUS) project by the mid-2020s and producing 5GW of low carbon hydrogen in the UK by 2030 would also be laid out in more detail shortly.

In the immediate term, she has pledged to prepare to introduce new legislation that would enable more competitive bidding for companies to build, own and operate the onshore electricity network, in addition to publishing plans for heat and buildings, as well as industrial decarbonisation and hydrogen.

The government is also to outline its overall strategy to deliver net zero emissions by 2050 ahead of COP26, which will be taking place in Glasgow during early November.

Energy Minister Anne-Marie Trevelyan said: “I expect to see significant progress over the next two years to deliver the Prime Minister’s 10 Point Plan and Energy White Paper and to put the UK right at the forefront for the future.

“This is such an important year for the UK, both with our COP26 Presidency and having set the Energy White Paper in place, to work with all those who want to be part of this extraordinary Net Zero revolution that we are determined to achieve.

“Ahead of COP26 we will be publishing our Net Zero Strategy which will bring forward a comprehensive plan across all sectors for transitioning to a net zero economy and really making the most of new growth and employment opportunities across the UK.

“We must be more sustainable and more efficient. Ensuring the consumer is part of this revolution and able to harness their own part in the global picture is going to be so important.

“There is a huge journey to go on and by the time we publish the Net Zero Strategy ahead of COP26, we’ll have a much more detailed picture of what that route map looks like.”