Scientists develop cooling paint that can lower building temperature by up to 7.7°C

The new acrylic contains calcium carbonate fillers, which allows the paint to reject sunlight and radiate heat into space 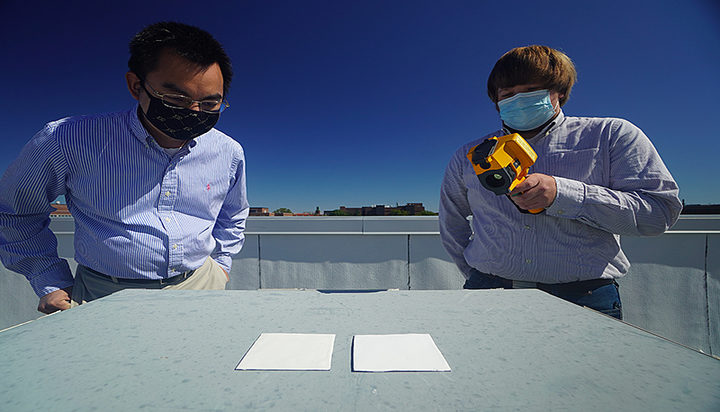 Scientists from Purdue University have developed a cooling white paint that could keep surfaces up to 7.7°C cooler than their ambient surroundings.

The paint, which is designed to replace air conditioners and reduce their environmental impact, absorbs nearly no solar energy and reflects heat away from the building.

The scientific team, which has published its findings on the Cell Report Physical Science journal, has developed the new acrylic with calcium carbonate fillers that reject sunlight and radiate heat into space.

Calcium carbonate is a compound found in rocks and seashells. According to the research, these calcium carbonate fillers absorb almost no ultraviolet rays due to their atomic structure.

The study also notes commercial ‘heat-rejecting paints’ currently on the market reflect only 80% to 90% of sunlight and cannot achieve temperatures below their surroundings, while the new paint reflects 95.5% sunlight and radiates infrared heat.

Infrared is a type of radiant energy, which is invisible to human eyes but can be felt as heat.

According to the researchers’ cost estimates, this paint could be both cheaper to produce than its commercial alternative and could save about a dollar (£0.77) per day that would have been spent on air conditioning for a one-story house of approximately 1,076 square feet.

Xiangyu Li, a Postdoctoral Researcher at the Massachusetts Institute of Technology, said: “We’re not moving heat from the surface to the atmosphere. We’re just dumping it all out into the universe, which is an infinite heat sink.”

Joseph Peoples, a Purdue PhD. Student in Mechanical Engineering and a Co-Author of the work, commented: “This paint is basically creating free air conditioning by reflecting that sunlight and offsetting those heat gains from inside your house.”