‘For jet zero, we need to look at climate-neutrality rather than just carbon-neutrality’ 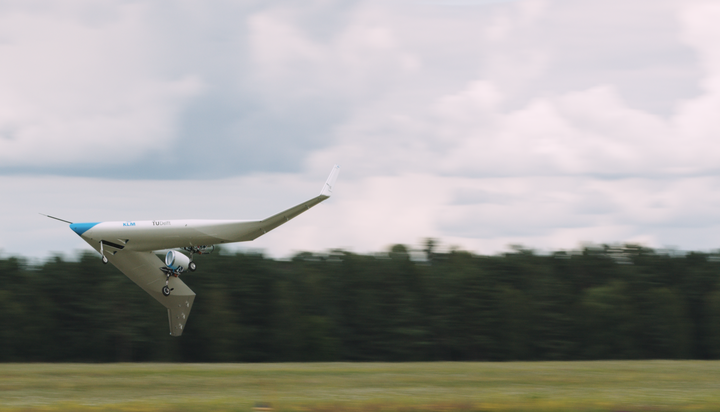 In delivering ‘jet zero’, which is the move towards a clean and environmentally-friendly aviation industry, it is important to look at climate-neutrality rather than just carbon-neutrality.

That’s the suggestion from Assistant Professor at Delft University of Technology Roelof Vos, who spoke to FNZ about his work on a new jet designed to cut both fuel and emissions by a fifth, in part due to its innovative V-shape.

In June 2019, TU Delft and KLM launched their plans for a Flying V project that could deliver a ‘cleaner’ perspective for the aviation industry and offer more sustainable commercial long-distance travel.

A few days ago, a scaled-down prototype made its first real-world test flight. After a period of extensive testing in a wind tunnel and a series of ground tests, it was time for the scientific team to find out if the Flying-V could actually fly.

And the first flight was successful.

But how can an aircraft be stable without a tail?

Mr Vos, who is the Project Leader, says: “As long as the neutral point of the wing is behind the centre-of-gravity, any wing is stable. See for example the B-49 bomber that was fielded in the sixties.”

He believes many changes need to happen in the world to see carbon-neutral flying: “One of them is the reduction in energy consumption of aircraft. If aircraft demands less energy, this would contribute to reduced emissions, whether they are carbon emissions of gaseous water from burning hydrogen.”

That’s why he thinks the industry needs to prioritise climate-neutrality rather than carbon-neutrality as the latter does not take into account the greenhouse effect of gaseous water emitted at high altitudes.

How important is the shape of a jet for a reduction in the actual fuel consumption?

The scientific analysis showed that the Flying V jet, carrying 365 passengers could save 25,000 litres of fuel for a range of 15,000 kilometres, compared to an A350 with the same number of passengers.

The team behind the project also worked on utilising specific materials and design to make the cabin of the jet lighter, including berths for sleeping, staggered and group seats.

Mr Vos adds the team is currently working on the research to demonstrate that the aircraft can be matured to meet all the safety requirements that exist in aviation: “I expect around ten years of research. After that, someone needs to make a decision about whether this technology is mature enough to put into production.

“From that moment on, I expect seven to ten years of development until entry into service. So we could expect the first flight of the Flying V by 2040.”