Is it the end of the world as we know it?

Is coronavirus as lethal as it seems or we are ourselves the greatest threat to our planet? 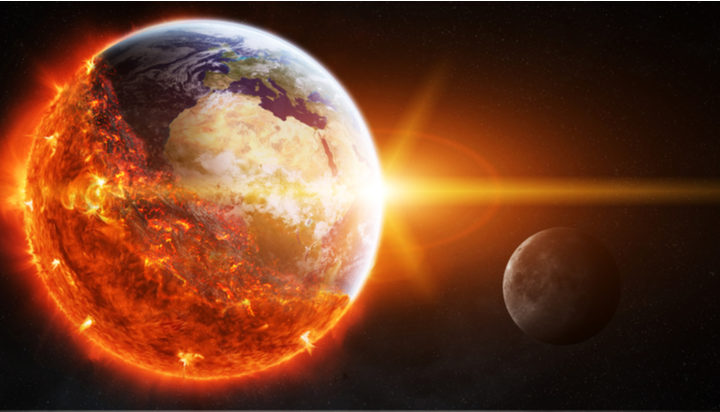 “This decision by the European Central Bank not to increase liquidity to Greek banks has forced the bank of Greece to recommend measures for a bank holiday and a limit on bank withdrawals.”

It was 10pm on 29th June 2015 when Greece was officially entering the era of capital controls. Greece’s Prime Minister in a televised address to the nation shattered millions of lives by announcing the closure of all banks.

I felt sick and really scared about the next day, the next week the rest of my life.

We Greeks would be restricted to take out just €60 (£42) a day. The Greek economy ground to a standstill with no money to pay wages to its public sector workers, pensions and unemployment schemes.

It was in these following days that I saw for the first time people being furloughed from their jobs. I saw TV programmes being suspended overnight, as media organisations were left unable to produce them anymore.

Young people with dreams being shattered after spending years on degrees to be offered positions with no salaries or paid with supermarket coupons ‘as there is no other alternative’.

At this precise moment, I started thinking that this was the end of the world.

It was this economic shockwave that made me and thousands of others leave Greece behind to find a better life.

Five years on and living now in London, I could never imagine history repeat itself. Yet on March 23rd that’s what happened. We went into lockdown, I started working from home like the rest of our team and millions of others.

But this coronavirus pandemic and lockdown is in my view far worse than that night five years ago in Greece. Because this is not just about a country it’s about the planet and there’s no where to escape.

Look up to the sky

We all have watched sci-fi movies of post-apocalyptic worlds projecting a narrative ‘far away from our time’. The life of a couple in a small Northern California town turned upside down as birds suddenly began to attack people in the 1963 Hitchcock’s film “The Birds” was a made up scenario, of nature turning on us. Ridiculous and unbelievable.

On December 12th the first COVID-19 incident was reported in Wuhan. Now the world is in lockdown. We are trapped behind our windows clapping NHS workers who battle in the front line. And yet nature itself though attacking our bodies, is at the same time showing us through our eyes, how we have been attacking it for centuries. Pollution, deforestation, overfishing and of course huge emissions.

The planet has shown us in just a few short weeks how well it can do without us.

On 19th February, Carbon Brief reported China’s emissions fell by around 25% during a four-week period of its coronavirus lockdown and at that time, there were only a few who paid attention to ‘the perfect storm that was coming’.

Just a few days after that, new data, based on observations from the Copernicus Sentinel-5P satellite, started showing strong reductions in nitrogen dioxide concentrations over several major cities across Europe – including Paris, Madrid and Rome. The satellite images showed nitrogen dioxide concentrations from 14th to 25th March 2020, compared to the monthly average levels from 2019.

NO2 concentrations over Europe (Image: ESA)

Some say “nature is healing’ or just reflecting the real impact of our everyday actions.

The change in Venice’s canals, as shown in the before and after satellite images, illustrates how the planet thrives when people are not there.

The pandemic stopped the gondolas of Venice, stilling the water in the city’s canals so much that people could see the bottoms of those famed waterways for the first time in memory. The change from October 2019 is more than evident on the slideshow below.

In the meantime, locals from Jalandhar district in Punjab, nearly 125 miles away from the Himalayas reported on social media that the Asian mountain range has become visible for the first time in 30 years.

Everything seems to show in perfect balance how the planet can conduct an environmental recovery.

Lockdowns in response to the coronavirus pandemic will see global emissions fall by a record 8%, according to the International Energy Agency, which estimates global carbon dioxide emissions are expected to decline even more rapidly across the remaining nine months of the year, to reach 30.6Gt (Gigatonnes) for 2020.

This would be the lowest level since 2010. Such a reduction would be the largest ever, six times larger than the previous record reduction of 0.4Gt in 2009 due to the financial crisis and twice as large as the combined total of all previous reductions since the end of World War II.

The world is undoubtedly breathing better now and this can give us lessons for tomorrow, as researchers at Harvard University have found that coronavirus patients in areas with higher air pollution, are more likely to die from the infection than patients who live in cleaner cities.

The current pandemic also introduced disruptive changes in production systems. Through a ‘butterfly effect’, these changes could lead to negative and positive shifts becoming more permanent features of post-COVID-19 economies, according to the IEA.

All fuels except renewables are set to experience their greatest contractions in demand for decades.

Nature has also welcomed the significant reduction in flights during the lockdown.

The organisation of air travel data OAG has been tracking the effect of the current Covid-19 epidemic on aviation capacity since the start of the year. The following table shows the change in the number of flights departing from various countries for each week since Monday 20th January 2020 until now, compared to the same week in 2019. Globally, the number of scheduled flights is now down by 67% compared to the same week last year.

And your birds can sing again

From the very first second that I open my eyes every morning, I can tell the difference of the post-corona world.

Have you noticed that after the sound of the ‘snooze button’ on your mobile, the very next thing that you hear is birdsong? This makes perfect sense, as some birds are likely to be lower in pitch than before since they have fewer planes and cars to compete with.

Seismologists have been looking at the effects of the coronavirus lockdown on seismic activity after a study in Brussels reported a drop in ambient seismic noise.

Thomas Lecocq, a seismologist at the Royal Observatory in Belgium, discovered that levels had fallen between 30% and 50% since the middle of last month, which coincides with the country closing schools and businesses as part of the lockdown.

The world is less noisy

What makes red-tailed hawks nest on the ledges of high-rise skyscrapers in New York, frigate birds to drift over the statue of Christ the Redeemer in Rio de Janeiro, a puma showing up in the centre of Santiago, Chile and a sika deer wandering in the streets and subway stations of the city of Nara, Japan?

The answer is common – our absence. All animals have found a niche where they can thrive in the heart of our cities.

What we do now creates a domino effect on nature. How else can we explain how the Maspalomas sand dunes in Gran Canaria, six weeks after Spain went on lockdown, have taken on an incredible new look which environmentalists say has not been seen in 50 years?

But is it just the reduction of ‘cultural noise’ or a deeper sense of change?

Overall, 90% of consumers polled earlier in April say their shopping and cooking habits have changed since the coronavirus lockdown started with more than half saying they value food more now since the restrictions kicked in, according to a survey by the environmental charity Hubbub. Also, 48% of respondents said they were throwing away less food and only 5% were throwing away more.

The pandemic has also led to major challenges in the handling of municipal solid and medical waste. In China, in Hubei province, the generation of medical waste with a high proportion of plastics increased sharply by 370%, according to the State Council’s Joint Prevention and Control Mechanism. From 20th January to 31st March, the accumulated medical waste in all of China was estimated as 207kt.

Let’s not move it

Can coronavirus change our everyday transport choices? According to a recent poll of 20,000 drivers conducted by the Automobile Association (AA), this is likely to happe, as more than one in five people say they will drive less after coronavirus lockdown restrictions are lifted.

Findings of the survey also suggest cities could see more people walking, cycling and running as 36% of people say they prefer these practices as part of their everyday routine.

Battery electric vehicles managed to increase their share of the car market significantly during April, rising from 0.9% in April 2019 to 31.8% this year, according to the latest report from the Society of Motor Manufacturers and Traders (SMMT), meanwhile UK new car sales declined by 97.3% in April.

Will we hear the Sirens call?

After all, is there any light at the end of the tunnel?

Well, I would try to give an answer comparing the current situation with Sirens, from Greek mythology.

Sirens were known for seducing sailors with their sweet voices and by doing so, lure them to their deaths. In Homer’s Odyssey, the hero, Odysseus encounters these creatures during his voyage home from Troy and to save his men, he ordered them to block their ears with wax. For himself, he asked his men to tie him to the mast of the ship. He heard the sirens sing but lived to tell the tale, being bound to the mast.

Our Sirens today are the environmentally harmful practices and actions we have all seen with our own eyes. Our waste, our greed and our general over consumption of the planets resources.

My fear is that once the horror is all over and we start moving to some normality, we will lose sight of the bigger picture and will ignore the lessons we learned during these atypical few weeks.

Unless we officially adopt the ‘doughnut’ model of the economy, developed by the UK economist Kate Raworth, we are doomed to fail.

In this theory the inner ring of our ‘doughnut’ stands for the universal standards of living based on the UN’s Sustainable Development Goals. The outer ring represents the ecological limits of the planet. We should always stay in this circle.

Climate inaction could trigger a next ‘Disease X’ which could potentially be more disruptive and lethal than Covid-19, according to the Intergovernmental Science-Policy Platform on Biodiversity and Ecosystem Services (IPBES).

The World Meteorological Organisation is warning a new global temperature record is likely to occur in the next five-year period,

It’s in our hands

How are we are going choose to live after lockdown – within ill-faced chaos or a sustainably formed world? I know it’s hard to not think beyond the short term economic pain we all faced, just like I faced back in Athens that night in 2015.

But our planet is more valuable than any short term economic shockwave.

Our choices now are about taking this time we have put our actions on pause, to consider the second chance we have been given.