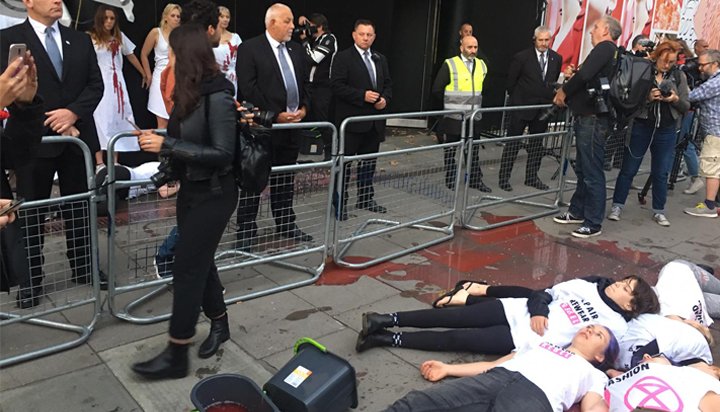 Climate activists from the Extinction Rebellion group doused themselves in fake blood and blocked an entrance to London Fashion Week yesterday.

Wearing white dresses and ‘bleeding hearts’, five activists glued themselves to the main entrance at the trade show, with other members of the group pouring buckets of fake blood around the entrance and conducting a “die in”.

Videos from the scene show a group of activists lying on the ground in pools of fake blood while one campaigner reads a poem about the environmental threats posed by the fashion industry.

The activist says: “The fashion industry is killing our planet. Every year, every month, every week, you abuse this Earth. You produce clothes for profit and pleasure, not for need.

“You choose profit over planet, profit over people, profit over our future. The fashion industry tugs at our heartstrings, it begs us to come into shops, feel its fabrics, don beautiful dresses, trendy tops, season’s hottest handbags.”

The group is calling on the fashion industry to “tell the truth” about its contribution to the climate and ecological crisis.

It warned the protest marks the beginning of five days of action against the fashion industry, which it describes as “one of the most polluting in the world with a carbon footprint more than international flights and shipping combined”.

The past year has seen Extinction Rebellion activists cause mass disruption across the world, including the UK, blocking parts of central London and stripping off in the House of Commons.