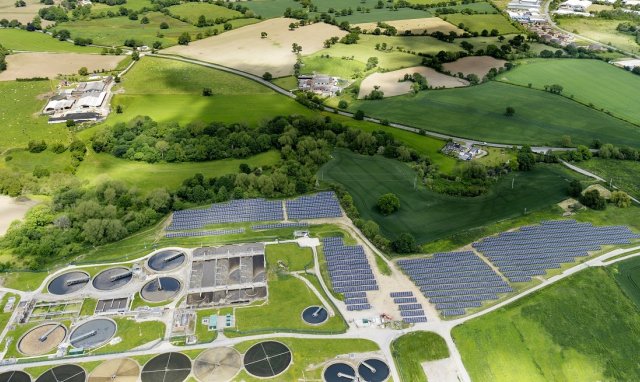 Welsh Water has announced it has reduced carbon emissions by 79% since 2010/11.

The water company says it is the result of investments in renewable energy and energy efficient technologies at its sites as well as buying all its electricity from green sources.

It will also generate around 25% of its energy needs through sources such as hydro turbines, wind, solar power and gas-to-grid by 2020, while the remaining 75% is made up of 100% green electricity.

Welsh Water’s Five Fords Energy Park project in Wrexham has undertaken a £36 million investment to turn it into a model green energy site – it processes sewage of around 180,000 customers in north Wales and includes 10,000 solar panels on site which generates a total of 2.5GWh of power, enough for 700 homes.

Welsh First Minister Mark Drakeford, who recently visited the site, said: “I was very pleased to have the opportunity to visit Five Fords Energy Park and to see the result of the developments which have taken place here making it a pioneer of green energy.

“Investment in sustainable water infrastructure supports the safety of communities, which lies at the heart of our Well-being of Future Generations Act. I’d also like to congratulate Welsh Water on cutting its carbon emissions by nearly 80% in the last decade. This is a great achievement.”

Welsh Water Chief Executive Chris Jones added: “In Welsh Water 2050 – our long term vision for the company – we outlined our plans to tackle some of the biggest challenges we face and climate change is one of the most serious. As part of this, we are striving to reduce our own impact on the climate, while also strengthening the resilience of our networks to deal with the increasing threat of adverse weather – like extreme cold snaps, flooding and prolonged drought conditions – that can impact our network and the services we provide our customers.

“We have worked closely with Welsh Government to set out how we will build on this encouraging progress and we’re delighted the First Minister was able to see the fruits of that co-operation first-hand.”