Domestic water bills to drop – except in London

Domestic water bills are likely to drop in all regions of the UK except in and around London. That’s according to plans submitted to Ofwat by the country’s water companies […] 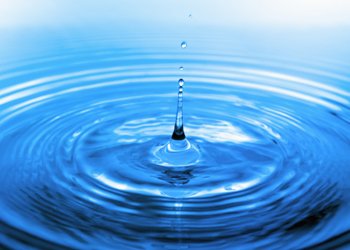 Domestic water bills are likely to drop in all regions of the UK except in and around London.

That’s according to plans submitted to Ofwat by the country’s water companies which show – mostly – price drops across the board planned for 2015 to 2020.

Virtually all companies apart from Thames Water expect to lower their bills.

While Thames has asked the regulator if it can bring in an average 10.6% rise for water and wastewater services, others such as Anglian Water have tabled a drop of 8.4%.

Wessex plans the next largest drop of 6% on average for water and wastewater prices. United Utilities and Southern plan minimal drops of 0.5% and 0.6% respectively.

Thames Water’s bills are going up to pay for expanding London’s underground sewage system, the Thames Tideway Tunnel project, to cope with the city’s growing population and rising volume of sewage. Without this the firm’s proposals would mean a bill reduction of 1%. 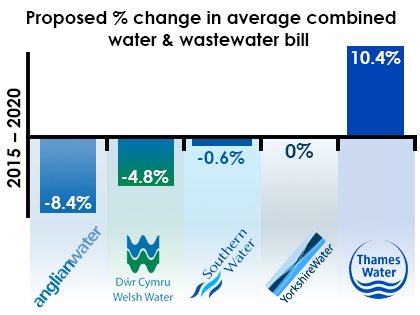 Regulator Ofwat says it will now analyse and challenge companies’ plans and proposed bill changes, with its decisions due in April 2014.

Jonson Cox, Ofwat’s Chairman said: “Ofwat challenged companies to listen carefully to their customers in preparing their plans. Our board made clear that current economic circumstances gave companies an opportunity to deliver falling bills in real terms over the coming five years while maintaining substantial ongoing investment.”

South West, Dŵr Cymru and Severn Trent’s bill drops are around the 5% mark. Both Northumbrian and Yorkshire expect to make no change at all to their average prices.

But Yorkshire’s 0% change comes from a price drop of 8.2% in water supply levelling out a 6.8% rise in wastewater charges.

Final decisions on prices will be made by January 2015, with new bills coming into effect in April 2015.