Bobbies on the beat with electric cars

The West Midlands Police is leasing 30 new electric cars from Nissan for officers to use on trips around the beat. The force announced it will use the Leaf models […] 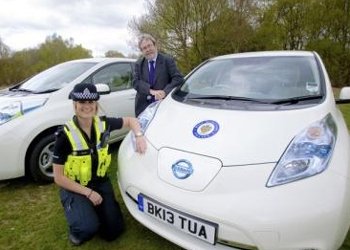 The West Midlands Police is leasing 30 new electric cars from Nissan for officers to use on trips around the beat.

The force announced it will use the Leaf models for the next three years as ‘diary’ cars which go out on pre-arranged appointments with victims and other members of the public who have contacted police. They will be split evenly across the force area.

The force became the first in the country to operate an electric patrol car in 2009 and last summer trialled the Nissan Leaf on all 10 local policing units (LPUs) across the area.

Usually diary cars average around 40 to 45 miles a day, so the new Nissans with a range of between 70 and 80 miles from a full battery charge should easily cope with officers’ demands.

David Wilkin, the force’s Director of Resources said: “The cars can carry five people, will be liveried with the force crest and will help to reduce our carbon footprint as they have zero emissions. As well as being greener, the Nissan Leaf costs a fraction of the cost per mile to run compared to a petrol car so will provide significant savings on fuel costs.”

Bob Jones, Police and Crime Commissioner (pictured with Birmingham North officer PC Caron Marks) added: “I welcome the introduction of the new cars. Their arrival will help the force save money on fuel costs at a time where we continue to face financial challenges and will also help us to do our bit for the environment.”