The chief executive of E.ON was gunning for the carbon floor price today at a conference on the Future of Utilities. Speaking in London this morning Tony Cocker criticised the […] 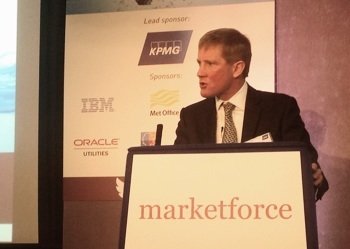 The chief executive of E.ON was gunning for the carbon floor price today at a conference on the Future of Utilities.

Speaking in London this morning Tony Cocker criticised the scheme for being unintelligible to bill payers and said his firm wished it could be scrapped.

The carbon floor price was announced by the Chancellor in the Budget 2011 and it will kick in officially from 1 April 2013. Slapping a price on the emissions from large firms’ energy use has been widely derided as a ‘carbon tax’.

Posing the question whether the carbon floor price is “transparent”, the energy boss answered himself: “Absolutely not. How many of our customers understand what that is?”

What it does is raise tax for the Exchequer, he went on to say, suggesting it was “ridiculous” that the carbon floor is “providing a subsidy for old nuclear and old hydropower and energy imports” which don’t need this help, instead of supporting new low carbon technology as the Government claims.

The Chancellor should just be honest and call it an “electricity tax” so that ordinary people understand what it is: “Let’s not delude ourselves, this is a poll tax on energy customers,” he said.

The Contracts for Difference (CfD) scheme which will be brought in by the Energy Bill – being finalised by the Department for Energy and Climate Change – could stand alone in funding low carbon energy without the floor price, he added.

Mr Cocker was speaking at the marketforce Future of Utilities event.