Two students from Durham University have put an electric car through its paces by taking it on a 700-mile road trip. Sergio Roldan (pictured left) and Ioannis Sarrigiannis planned the […] 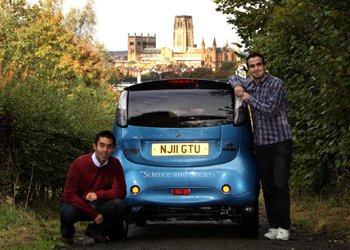 Two students from Durham University have put an electric car through its paces by taking it on a 700-mile road trip.

Sergio Roldan (pictured left) and Ioannis Sarrigiannis planned the round trip from Durham to Cardiff and back as part of a research project called the Customer-Led Network Revolution (CLNR).

The journey with a regular petrol car would normally take around 652 miles but the students had to drive further to find charging stations. They needed to recharge the car’s battery around every 80 miles.

The i-MIEV car arrived in Cardiff two days after leaving Durham at a ‘fuel’ cost of just £30 – the annual subscription fee for charging schemes.

Sergio Roldan, one of the drivers said: “An improvement in the current UK infrastructure with more rapid charging points would decrease the journey time significantly.”

Dr Liz Sidebotham, Communications Manager for the CLNR project, which is part-funded by Ofgem, said: “The experiment provides a light-hearted illustration of a serious point. Electric vehicles are great for short local trips such as urban commutes, but this long-distance trip highlights that the recharging network has yet to catch up with demand.

“With a Government target of 1.7 million electric cars and plug in hybrids by 2020 and an interim goal of 250,000 by 2015, there is clearly plenty to be done to match the extent of the charging infrastructure to widespread public support for cheaper and greener travel.”