A pilot project which traps carbon from a Welsh gas plant has successfully captured its first tonne of CO2. The project captured the greenhouse gas at energy supplier npower’s Aberthaw […] 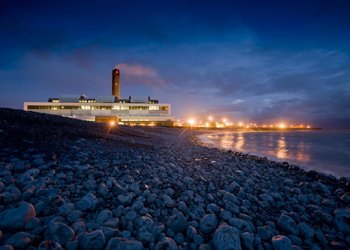 A pilot project which traps carbon from a Welsh gas plant has successfully captured its first tonne of CO2.

The project captured the greenhouse gas at energy supplier npower’s Aberthaw Power Station (pictured), while the technology has been designed by Cansolv Technologies which part of the Shell Group.

When it gets into full swing, the plant will capture around 50 tonnes of CO2 every day from Aberthaw’s flue gases, which is roughly the amount of CO2 produced by 3MW of electricity generation.

The CO2 is extracted by mixing the flue gas with the organic compound amine, put under heat and run through a pressure reactor.

Kevin Nix, UK Head of Hard Coal and Gas for RWE Generation – npower owner RWE’s new business which gathers all of its European power plants under one roof from 2013 – said: “This pilot plant at Aberthaw will provide invaluable data on the viability of capturing carbon at an industrial scale, and help RWE to better understand how this technology could be used to reduce carbon emissions at coal-fired power stations.”

Carbon capture and storage technology (CCS) is seen as expensive and years away from being able to roll out to coal and gas plants in the UK. The Government’s planned cash injection of £1billion for the technology has been dogged with controversy. The first project it was destined for collapsed a year ago while there have been complaints a new competition to dish it out has ignored an obvious front-runner.