Emergency services workers should be trained to cope with accidents involving hybrid and electric vehicles (EVs), believes an international car body. SAE International which is based in the United States […] 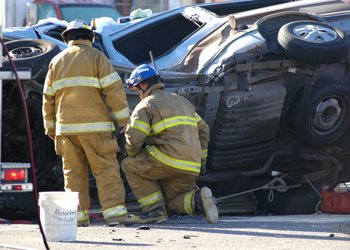 SAE International which is based in the United States has published a technical standard with recommendations for emergency personnel, such as bigger car labels or learning how to disable the circuits.

However a crash in the Chinese city of Shenzhen in June which killed three after a sports car ran into the back of two all-electric taxis setting one ablaze, reportedly prompted concerns over the vehicles’ safety.

Todd Mackintosh, SAE committee chairman said: “As electric vehicles enter the marketplace in greater numbers, it’s an appropriate time to recognise best practices that facilitate a safe response when these vehicles are in an accident.”

Learning where high voltage parts are in cars as well as how to disable them along with air bags and seatbelts could also offer the “safest response” methods for workers and car occupants, suggested Mr Mackintosh, adding: “Safety is our top priority.”

Carmakers should follow common standards for disabling high-voltage circuits, according to the car group’s recommendations, while second responders at accidents such as repair trucks towing away vehicles should get safety instructions for dealing damaged or inoperable hybrid or electric vehicles.