Bad news for turkeys – Christmas power should be A-OK

It’s bad news for turkeys but better for hungry revellers in the Britain as power providers are expecting little disruption to supply over the holiday period. Last Christmas saw extreme […] 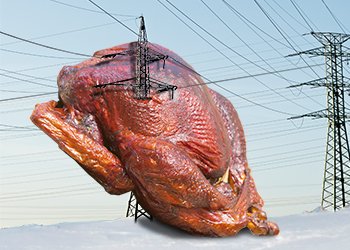 It’s bad news for turkeys but better for hungry revellers in the Britain as power providers are expecting little disruption to supply over the holiday period.

Last Christmas saw extreme weather beat down on parts of Scotland, bringing the worst conditions the country had seen in 25 years. Gale force winds hit 100mph in places and 160mph on some hilltops, bringing down power lines and cutting off power to thousands.

However the Energy Networks Association said ScottishPower and SSE learnt a lot from their experiences last year. The operators themselves say there are no forecasts for more extreme weather this season.

ScottishPower told ELN they had a large programme over the Autumn including cutting down trees near power lines in case of strong winds, with an “in-depth” plan in particular across Scotland.

SSE Power Distribution has carried out a similar programme of tree-cutting, investing £110million to strenghten the networks in the north of Scotland, central and southern England.

Areas like Cornwall or Devon have been warned to prepare for continued flooding over the holiday but National Grid say the substations have strong flood defences. If there is any flooding or strong winds these are most likely to affect local substations but distribution network operators say they have large teams on standby over the holiday in case of emergency.

As for the nation on the whole, the National Grid says energy demand on Christmas Day is traditionally lower than any other over December. A spokesperson told ELN: “Usually you see a drop in demand. It’s surprising for some – people think sitting at home and watch telly uses a lot of energy but there’s virtually no business or industry load on the system.”