There was outrage today as a ban on shale gas was lifted, with community groups expressing fears the Government is “bulldozing” planning permission across the country. As the Energy Secretary […] 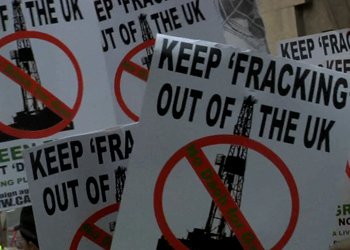 There was outrage today as a ban on shale gas was lifted, with community groups expressing fears the Government is “bulldozing” planning permission across the country.

As the Energy Secretary announced a new traffic light system with stringent checks on safety and an emphasis on local co-operation, he appears to have already upset the small but growing anti-shale gas groups across the country, led by Britain & Ireland Frack Free.

Hundreds of protestors marched on parliament two weeks ago to demand the Government ban the new gas, many citing environmental fears.

Responding to the news today, Vanessa Vine, who runs BIFF said: “It is no surprise to hear that our Ministers are intent on bulldozing permissions through in the UK, with no regard either for the economic realities or of the dangers both to environment and human health.

“With hindsight of the terrible damage to the environment and the health of both people and livestock near unconventional methane wells in the US and Australia, the EU Parliament report has wisely urged caution on implementing fracking in Europe, yet now this ecocidal fossil fool lust-at-any-cost is being given further sanction on our shores.”

Last week Chancellor George Osborne suggested shale gas would help British families and firms benefit from the same low gas prices seen in the United States after the recent boom in the gas.

But environmental groups said this “hype” was overrated.

Jenny Banks, Energy Policy Officer at WWF-UK, said: “Despite all the hype, there is still considerable uncertainty as to how much shale gas is in the ground and whether it will be socially, environmentally or economically viable to extract.

“One thing which is absolutely clear is that more reliance on gas is a high risk gamble which is totally incompatible with meeting the UK’s legally binding carbon budgets. Gas has been the main cause of hikes in people’s bills over the past decade and gas prices are expected to continue to rise. The sooner senior Government figures wake up from their shale gas fantasy and see the renewable success story going on right in front of them, the better.”

However the role gas plays in the country was stoutly defended by its industry trade body.

Malcolm Webb, Chief Executive for Oil & Gas UK said: “Natural gas is currently providing about a third of Britain’s electricity and also heats 80% of our homes and it will continue to be an essential source of energy for Britain for some decades to come. Shale gas potentially comprises an important part of that resource, so we welcome the government’s lifting of the embargo on exploration and introduction of controls that mitigate the risks of any associated seismic activity.”