Electric cars seem revolutionary enough as it is – but one designer has given the green vehicles a makeover which makes them stand out from the crowd even more. The […] 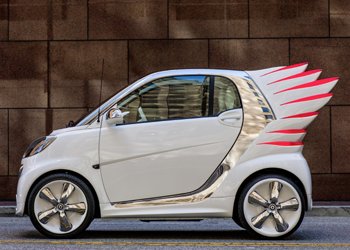 Electric cars seem revolutionary enough as it is – but one designer has given the green vehicles a makeover which makes them stand out from the crowd even more.

The fortwo electric, a battery-powered version of the Mercedes-Benz smart car has been given flashing wings by Jeremy Scott who is more used to crafting fantastic costumes for popstars such as Lady Gaga, Madonna, Katy Perry and Rihanna.

Explaining why wings are such a good fit with an EV, the LA-based fashion designer said: “For me, wings mean freedom, a sense of weightlessness. Because of this, I definitely wanted to have them for the smart electric drive in order to convey the way it frees the environment of noxious emissions and symbolises the new lightness of mobility.”

Unveiled on the eve of the LA Auto Show, the car’s wings “light up like igniting rockets to form avant-garde rear lights”, according to car firm smart.

Called the smart forjeremy, it has a 55 kW electric motor and can accelerate from 0 – 37 mph in 4.8 seconds and with a maximum speed of 78 mph. The urban two-seater is powered by a 17.6 kWh lithium-ion battery and can travel roughly 90 miles in city traffic.