A new type of technology which was inspired by a flashing umbrella is now saving energy in a million American homes. Researchers behind the device say the idea came from […] 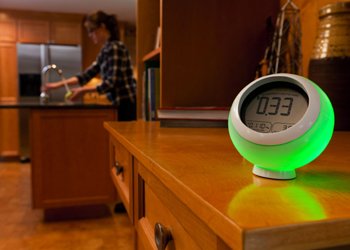 A new type of technology which was inspired by a flashing umbrella is now saving energy in a million American homes.

Researchers behind the device say the idea came from an earlier invention – a brolly with a handle which flashes every time meteorologists predict wet weather.

People then cut down on using energy when there is a “spike” in demand and when it is more expensive. This is meant to soften the peaks of energy use and put less of a strain on power stations.

The kit works in the USA because (in some states) the market is different to the UK: the price of energy varies during the day.

Pritesh Gandhi, inventor and chief executive of Ambient Devices told ELN: “Our approach is to build more of an experience around products, by embedding information into everyday objects.”

With the brolly, they took data from weather feeds and broadcast it with long-range waves to the handle – and have done something similar with the ‘Orb’. “People pay attention to it because it’s in their everyday surroundings,” added Mr Gandhi.

Ambient has 1.1million of its energy devices in homes across Boston, Massachusetts in the USA. Pilot studies showed the ‘Orb’ could cut home energy use by 25%.

Although variable pricing throughout the day isn’t wideoperating in Britain, Gandhi sees clear potential for the technology to work here.

With millions of smart meters on the way – the Government plans for 53 million homes to have them by 2019, consumers are going to get more information than they can dream of.

The inventor’s worry is that DECC is amassing too much information: “My fear is they’re building an overwhelming amount of data. It’s not that compelling. There are more simplistic and effortless ways of presenting data. If you inundate consumers, they’ll get sick of it and become accustomed to the device.”

Mr Gandhi hopes various utility suppliers he has met with across the UK may well adopt the kit.