Protestors who have been occupying EDF’s newest gas power station ended their seven day protest by handing themselves in to the Nottinghamshire police. Yesterday the last two campaigners from No […] 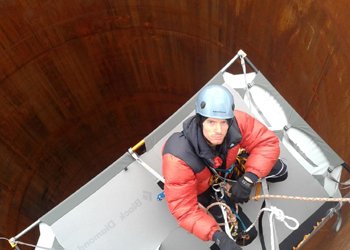 Protestors who have been occupying EDF’s newest gas power station ended their seven day protest by handing themselves in to the Nottinghamshire police.

Yesterday the last two campaigners from No Dash for Gas abseiled down the side of one of the chimneys. Originally 16 activists had been camping in suspended rigs in the flues of two chimneys (pictured).

It is the UK’s longest ever occupation of a power station and its organisers trumpeted the amount of carbon emissions they have kept from the atmosphere – 2371 tonnes of carbon dioxide emissions, equivalent to taking 465 cars off the road for a year.

They are opposed to possible government plans to build up to 20 new gas-fired power stations as they say this would “lock” the country into relying on fossil fuels for another 30 years, stopping the UK from hitting greenhouse gas cutting targets and putting up bills. The group claims the end of the protest is “only the beginning”.

Ewa Jasiewicz, the last person coming down from the chimney said: “This was the first time activists have managed to successfully shut down a power station, and the longest occupation of a power station the UK has ever seen.

“We stopped 20,000 tonnes of CO2 being emitted, prevented any construction work on the site for a week and got our message about how reckless and ridiculous, let alone probably illegal, George Osborne’s proposed ‘dash for gas’ is out to thousands of people. I’m proud of what we’ve achieved – but it’s only the start of the battle for our energy future.”

EDF Energy, which owns the plant said it respected the right to “peaceful protest” but criticised this as an “act of trespass [which] put at risk the safety of the individuals involved and has diverted the valuable resources of the local police and other agencies.”

The French energy supplier said in a statement: “Once completed, West Burton B will provide electricity to around 1.5 million homes at a time when many of our nation’s powers stations will be coming to the end of their operating lives.”